Loudoun County was established in 1757 from Fairfax County. The county is named for John Campbell, Fourth Earl of Loudoun and Governor General of Virginia from 1756–59. Western settlement began in the 1720s and 1730s with Quakers, Scots-Irish, Germans and others moving south from Pennsylvania and Maryland and by English and African slaves moving upriver from Tidewater. 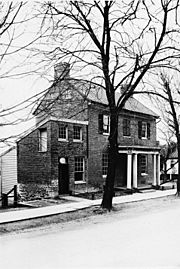 By the time of the American Revolution, it was Virginia's most populous county. It was also rich in agriculture, and the county's contributions of grain to George Washington's Continental Army, earned it the nickname "Breadbasket of the Revolution."

During the War of 1812, important Federal documents and government archives were evacuated from Washington and stored at Leesburg. Local tradition holds that these documents were stored at Rokeby House, making Leesburg briefly the capital of the United States.

U.S. President James Monroe treated Oak Hill Plantation as a primary residence from 1823 until his death on July 4, 1831. The Loudoun County coat of arms and flag, granted by the English College of Arms, memorialize the special relationship between Britain and the United States that developed through his Monroe Doctrine.

Early in the American Civil War, the Battle of Balls Bluff took place near Leesburg on October 21, 1861. Future jurist Oliver Wendell Holmes, Jr. was critically wounded in that battle along the Potomac River. During the Gettysburg Campaign in June 1863, Confederate Major General J.E.B. Stuart and Union cavalry clashed in the battles of Aldie, Middleburg, and Upperville. Confederate partisan John S. Mosby based his operations in Loudoun and adjoining Fauquier County (for a more in-depth account of the history of Loudoun County during the Civil War, see Loudoun County in the American Civil War).

In 1962, Washington Dulles International Airport was built in southeastern Loudoun County in Sterling. Since then, Loudoun County has experienced a high-tech boom and rapid growth. Accordingly, many have moved to eastern Loudoun and become residents of planned communities such as Sterling Park, Sugarland Run, Cascades, and Ashburn Farms, making that section a veritable part of the Washington suburbs. Others have moved to the county seat or to the small towns and rural communities of the Loudoun Valley.

According to the U.S. Census Bureau, Loudoun County has a total area of 521 square miles (1,350 km2), of which 516 square miles (1,340 km2) is land and 6 square miles (16 km2) (1.1%) is water. It is bounded on the north by the Potomac River; across the river are Frederick, Washington and Montgomery counties in Maryland; it is bounded on the south by Prince William and Fauquier counties, on the west by watershed of the Blue Ridge Mountain across which are Jefferson County, West Virginia and Clarke County, and on the east by Fairfax County. The Bull Run Mountains and Catoctin Mountain bisect the county. To the west of the range is the Loudoun Valley. Bisecting the Loudoun Valley from Hillsboro to the Potomac River is Short Hill Mountain.

In 2011, Census survey data concluded that Loudoun County had the highest median income in the country at $119,134.

From 1980 to 2014, deaths from cancer in Loudoun County decreased by 46 percent, the largest such decrease of any county in the United States.

The Silver Line of the Washington Metro, will extend into Loudoun County. The on-going extension will include stations at the Dulles International Airport, and two stations in Ashburn, Virginia. 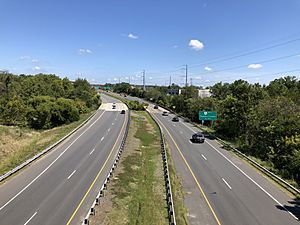 Traditionally a rural county, Loudoun's population has grown dramatically since the 1980s. Having undergone heavy suburbanization since 1990, Loudoun has a full-fledged service economy. It is home to world headquarters for several Internet-related and high tech companies, including Verizon Business, Telos Corporation, Orbital Sciences Corporation, and Paxfire. Like Fairfax County's Dulles Corridor, Loudoun County has economically benefited from the existence of Washington Dulles International Airport, the majority of which is in the county along its border with Fairfax.

Loudoun County retains a strong rural economy. The equine industry has an estimated revenue of $78 million. It is home to the Morven Park International Equestrian Center which hosts national horse trials. In addition, a growing wine industry has produced several internationally recognized wines. Loudoun County now has 40 wineries and over 25 active farms. Loudoun has rich soil and was in the mid-19th century a top wheat-producing county in the fourth largest wheat-producing state.

Loudoun County houses over 60 massive data centers, with many housing the cloud operations of Amazon Web Services (AWS). These data centers are estimated to carry 70 percent of global web traffic.

According to the county's comprehensive annual financial reports, the top employers in the county are:

The county is served by Loudoun County Public Schools (LCPS). LCPS serves over 70,000 students from Kindergarten through 12th grade and is Virginia's fifth largest school system. Loudoun County schools recently ranked 11th in the United States in terms of educational achievement versus funds spent. Loudoun County also sends students to its Loudoun Academy of Science, formerly housed within Dominion High School now within the Academies of Loudoun, and is eligible to send students to Thomas Jefferson High School for Science and Technology, a STEM magnet school in Alexandria, Virginia.

All content from Kiddle encyclopedia articles (including the article images and facts) can be freely used under Attribution-ShareAlike license, unless stated otherwise. Cite this article:
Loudoun County, Virginia Facts for Kids. Kiddle Encyclopedia.