Washington Dulles International Airport (IATA: IAD, ICAO: KIAD, FAA LID: IAD) is a public airport in Dulles, Virginia. It is 26 miles (42 km) west of Washington, D.C. The airport serves the Baltimore-Washington DC-Northern Virginia metropolitan area and the District of Columbia. It is named after John Foster Dulles. He was the Secretary of State under Dwight D. Eisenhower. The Dulles main terminal is a well-known landmark it was designed by Eero Saarinen. The airport is run by the Metropolitan Washington Airports Authority. Dulles Airport covers an area of 11,830 acres (47.9 km2). It is on the border of Fairfax County and Loudoun County, Virginia.

Dulles lies in two unincorporated communities, Chantilly and Dulles. It is west of Herndon and southwest of Sterling. Washington Dulles Airport is the largest airport in the Washington metropolitan area. It is one of the nation's busiest airports. The airport has over 23 million passengers a year. Daily, more than 60,000 passengers leave Washington Dulles to more than 125 destinations around the world. Dulles is the busiest airport in Virginia. It is also the busiest in the Baltimore-Washington Metropolitan Area.

At the end of World War II, growth in aviation and in the Washington metropolitan area caused Congress to pass the Washington Airport Act of 1950. This provided the money for a second airport. The location was selected by President Dwight Eisenhower in 1958.

Dulles has been used for many Washington based movies. This started soon after it opened with the 1964 movie Seven Days in May. The 1983 comedy D.C. Cab, starring Mr. T, Adam Baldwin and Gary Busey showed scenes outside of the main terminal at Dulles Airport. The action movie Die Hard 2: Die Harder takes place mainly at Dulles airport. The plot of the movie deals with the takeover of the airport's tower and communication systems by terrorists. The movie was not filmed at Dulles. Los Angeles International Airport (LAX) and the now-closed Stapleton International Airport in Denver were used. Part of the thriller The Package (starring Gene Hackman and Tommy Lee Jones) took place at Dulles. Again it was not filmed in Dulles. Chicago's O'Hare International Airport was used in its place. 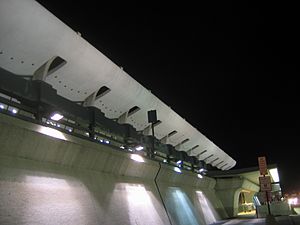 Portions of all three sequels to the disaster film Airport were filmed at Dulles: Airport 1975, with Charlton Heston, Karen Black and George Kennedy; Airport '77, with Jack Lemmon, Christopher Lee and George Kennedy; and The Concorde ... Airport '79. Dulles was the site filmed as a New York City airport, in the 1999 comedy, Forces of Nature. The airport is also shown in the movie Body of Lies. In the scene, Leonardo DiCaprio says he is in "Dubai International" on the phone. The curved roof and windows on the upper deck of the Dulles departures area can be seen behind him. The terminal can also be seen in the movie In The Line of Fire starring Clint Eastwood.

Dulles is used in many episodes of the television series The X-Files.

All content from Kiddle encyclopedia articles (including the article images and facts) can be freely used under Attribution-ShareAlike license, unless stated otherwise. Cite this article:
Washington Dulles International Airport Facts for Kids. Kiddle Encyclopedia.