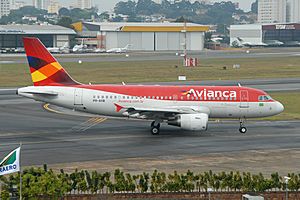 An Avianca airplane at São Paulo

Avianca is the national and largest airline of Colombia. It is the second oldest airline in the world. It began flying in 1919. Avianca has grown to become one of the largest airlines in the Americas. It flies to 121 cities with over 140 airplanes. In 2009, TACA Airlines and Avianca were combined to create a single airline.

All content from Kiddle encyclopedia articles (including the article images and facts) can be freely used under Attribution-ShareAlike license, unless stated otherwise. Cite this article:
Avianca Facts for Kids. Kiddle Encyclopedia.