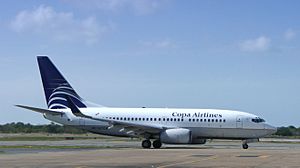 Copa Airlines is the national airline of Panama.

Copa Airlines was founded in 1947. Its first international flights began in the 1970s. They went to airports in Colombia, Costa Rica and Jamaica.

As of March 2015, the airline was flying almost 100 airplanes to 69 cities in the Americas.

All content from Kiddle encyclopedia articles (including the article images and facts) can be freely used under Attribution-ShareAlike license, unless stated otherwise. Cite this article:
Copa Airlines Facts for Kids. Kiddle Encyclopedia.