Recife is the fourth-largest urban agglomeration in Brazil with 4,054,866 inhabitants, the largest urban agglomeration of the North/Northeast Regions, and the capital and largest city of the state of Pernambuco in the northeast corner of South America. The population of the city proper was 1,625,583 in 2016. The first slave port in the Americas, Recife was founded in 1537, during the early Portuguese colonization of Brazil, as the main harbor of the Captaincy of Pernambuco, known for its large scale production of sugar cane. It was the former capital Mauritsstad of the 17th century colony of New Holland of Dutch Brazil, established by the Dutch West India Company. The city is located at the confluence of the Beberibe and Capibaribe rivers before they flow into the South Atlantic Ocean. It is a major port on the Atlantic. Its name is an allusion to the stone reefs that are present by the city's shores. The many rivers, small islands and over 50 bridges found in Recife city centre characterise its geography and led to the city being called the "Brazilian Venice". As of 2010[update], it is the capital city with the highest HDI in Northeast Brazil and second highest HDI in the entire North and Northeast Brazil (second only to Palmas).

The Metropolitan Region of Recife is the main industrial zone of the State of Pernambuco; major products are those derived from cane (sugar and ethanol), motor vehicles, ships, oil platforms, electronics, software, and others. With fiscal incentives by the government, many industrial companies were started in the 1970s and 1980s. Recife has a tradition of being the most important commercial hub of the North/Northeastern region of Brazil, with more than 52,500 business enterprises in Recife plus 32,500 in the Metro Area, totaling more than 85,000.

Recife stands out as a major tourist attraction of the Northeast, both for its beaches and for its historic sites, dating back to both the Portuguese and the Dutch colonization of the region. The beach of Porto de Galinhas, 60 kilometers (37 mi) south of the city, has been repeatedly awarded the title of best beach in Brazil and has drawn many tourists. The Historic Centre of Olinda, 7 kilometers (4.3 mi) north of the city, was declared a UNESCO World Heritage site in 1982, and both cities' Brazilian Carnival are among the world's most famous.

The city is an education hub, and home to the Federal University of Pernambuco, the largest university in Pernambuco. Several Brazilian historical figures, such as the poet and abolitionist Castro Alves, moved to Recife for their studies. Recife and Natal are the only Brazilian cities with direct flights to the islands of Fernando de Noronha, a World Heritage Site.

The city was one of the host cities of the 2014 FIFA World Cup. Additionally, Recife hosted the 2013 FIFA Confederations Cup and the 1950 FIFA World Cup. The city, despite having a higher crime rate than the southern region of Brazil, is considered the safest state capital in northeastern region. It has a much lower crime than other regional capitals, such as Salvador or São Luís, yet despite that crime rose 440% in 2015.

Recife began as a collection of fishing shacks, inns and warehouses on the delta between the Capibaribe and Beberibe Rivers in the captaincy of Pernambuco, sometime between 1535 and 1537 in the earliest days of Portuguese colonisation of Terra de Santa Cruz, later called Brazil, on the northeast coast of South America. It was a settlement of colonial fishermen and way station for Portuguese sailors and passing ships.

Olinda with Recife in the background. Olinda was declared a UNESCO World Heritage site in 1982.

Recife was the most cosmopolitan city in America during the John Maurice of Nassau government.

The first documented reference to the settlement with its "arrecife dos navios" (reef of the ships) was in the royal Charter Act of March 12, 1537, establishing Olinda, 6 kilometres (3.7 miles) to the north, as a village, with its port where the Beberibe River meets the sea. Olinda (and Igarassu before it) had been settled in 1536 by Captain General Duarte Coelho, a Portuguese nobleman, proprietor and administrator of the captaincy of Pernambuco.

The city is named for the long reef recife running parallel to the shoreline which encloses its harbour. The reef is not as sometimes stated, a coral reef, but a consolidated ancient beach, now as firm and hard as stone.

In 1541, Coelho returned from the Kingdom of Portugal with the machinery for an engenho (sugar mill), and with it, his brother-in-law established the first mill named Nossa Senhora da Ajuda (Our Lady of Help), in the floodplain of the Beberibe River at Recife. At that time the banks of the Capibaribe River were covered by sugar cane.

Recife was capital of the 17th century New Holland (Dutch Brazil) established by the Dutch West India Company and was called Mauritsstad.

The Mascate War of 1710–1711 pitted merchants of Recife against those of nearby Olinda.

Panorama of Recife in 1855 by Friedrich Hagedorn. 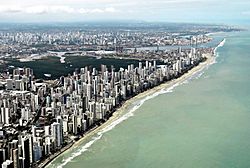 Open skies in Recife. The city has one of the greatest rainfall averages in Brazil. 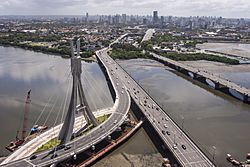 Due to the city's proximity to the equator, Recife's weather is generally warm. It has a number of islands, rivers, waterways and bridges that crisscross the city and has often been called "The Venice of Brazil". The city is located amidst tropical forests which are distinguished by high rainfall levels, resulting in poor soil quality as the heavy dense rainfall washes away the nutrients. There is an absence of extreme temperatures and the area enjoys a cool breeze due to the trade winds from the South Atlantic Ocean to the east.

Recife has a tropical climate, more specifically a tropical monsoon climate (Am in Köppen climate classification), with warm to hot temperatures and high relative humidity throughout the year. However, these conditions are relieved by pleasant westwardly trade winds blowing in from the ocean.

All content from Kiddle encyclopedia articles (including the article images and facts) can be freely used under Attribution-ShareAlike license, unless stated otherwise. Cite this article:
Recife Facts for Kids. Kiddle Encyclopedia.