International Business Machines Corporation (IBM) is a company from the United States that makes and sells software, computer hardware, infrastructure services, and consulting services. IBM is one of the biggest Information Technology companies in the world. IBM has had the most patents of any technology company for many years, and has made many important inventions and discoveries that have improved computers.

Nicknamed Big Blue, IBM is one of 30 companies included in the Dow Jones Industrial Average and one of the world's largest employers, with (as of 2016) nearly 380,000 employees. Known as "IBMers", IBM employees have been awarded five Nobel Prizes, six Turing Awards, ten National Medals of Technology and five National Medals of Science. 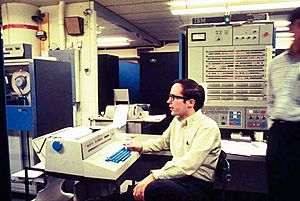 IBM began in 1911, it was called the "Computer Tabulating Recording Company". It was set up by a man named Charles Flint. There were no computers at that time, so IBM made other machines, such as typewriters. In 1924, the company changed its name to International Business Machines (IBM). In 1937, the company's Tabulating Machines were used by the United States government to record information about Americans, so they could make a new law called the Social Security Act.

During World War II, IBM made guns for the American army. During the 1960s, IBM computers were used for American space exploration. From the 1980s until 2005, IBM made personal computers. In 2005, IBM sold their personal computer manufacturing to a Chinese company called Lenovo. Today, IBM mostly makes software, and some powerful supercomputers.

On April 7, 1964, IBM announced the first computer system family, the IBM System/360. It spanned the complete range of commercial and scientific applications from large to small, allowing companies for the first time to upgrade to models with greater computing capability without having to rewrite their applications. It was followed by the IBM System/370 in 1970. Together the 360 and 370 made the IBM mainframe the dominant mainframe computer and the dominant computing platform in the industry throughout this period and into the early 1980s. They, and the operating systems that ran on them such as OS/VS1 and MVS, and the middleware built on top of those such as the CICS transaction processing monitor, had a near-monopoly-level hold on the computer industry and became almost synonymous with IBM products due to their marketshare.

IBM has a large and diverse portfolio of products and services. As of 2016, these offerings fall into the categories of cloud computing, cognitive computing, commerce, data and analytics, Internet of Things, IT infrastructure, mobile, and security. IBM also hosts the industry-wide cloud computing and mobile technologies conference InterConnect each year.

IBM is nicknamed Big Blue in part due to its blue logo and color scheme, and also partially since IBM once had a de facto dress code of white shirts with blue suits.

All content from Kiddle encyclopedia articles (including the article images and facts) can be freely used under Attribution-ShareAlike license, unless stated otherwise. Cite this article:
IBM Facts for Kids. Kiddle Encyclopedia.