Armonk is a hamlet and census-designated place (CDP) in the town of North Castle, New York, located in Westchester County.

The corporate headquarters of IBM are situated in Armonk.

There were 1,172 households, out of which 44.5 percent had children under the age of 18 living with them, 74.7 percent were married couples living together, 7.7 percent had a female householder with no husband present, and 15.1 percent were non-families. 13.1 percent of all households were made up of individuals, and 6.0 percent had someone living alone who was 65 years of age or older. The average household size was 2.95 and the average family size was 3.23.

Armonk is host to several annual events. The Armonk Outdoor Art Show is a fine art and crafts juried show sponsored by Friends of the North Castle Public Library ("the Friends") where approximately 200 artists gather at Community Park to show and sell their work. The event involves local volunteers with the proceeds from the show benefiting the North Castle Public Library and its Whippoorwill Hall performance auditorium. One week before the Art Show, the Armonk Chamber of Commerce sponsors the "Jamie's 5K Run For Love" run/walk road race. The proceeds from this event also go to the library with a portion reserved specifically for children's programs. The Friends also sponsors the Armonk Players, a community theater group that stages two full productions and several readings each year at Whippoorwill Hall.

In addition, the Armonk chapter of the Lions Club sponsors a Fol-De-Rol, held during either the first or second weekend in June. The four-day event takes place in Wampus Brook Park and by Wampus Elementary School. It draws local businesses and artisans to set up tents and sell their merchandise. In addition, local restaurants set up tents to sell food and there are rides and midway games for children. Local student and professional music groups play in the gazebo to entertain the crowds.

Armonk also holds a community-wide Relay For Life during the first weekend in May. The event is sponsored locally by the Byram Hills chapter of Youth Against Cancer.

The latest Armonk tradition is Frosty Day. A parade goes down Main Street onto Bedford Road, past the "Village Square" mentioned in the song "Frosty the Snowman" to Wampus Brook Park for a gala holiday lighting ceremony. Steve Nelson, the song's lyricist, was a frequent visitor to Armonk after World War II from his home in nearby White Plains. In 1950, he wrote the song's lyrics which he put to Walter E. Rollins' music; it was the same year that he was looking for land in Armonk on which to build his new home. 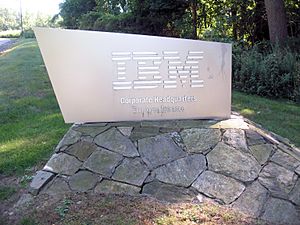 The Byram Hills Central School District serves North Castle, New Castle, Mount Pleasant, and Bedford. All of the schools in the district are located in Armonk. The district has one high school, Byram Hills High School (for students in grades 9–12), one middle school, H. C. Crittenden Middle School (grades 6–8), and two primary schools, Wampus Elementary School (grades 3–5) and Coman Hill Elementary School (grades K–2). Before 2002, grade 5 was in Crittenden, grades 3 and 4 were in Coman Hill, and grades K through 2 were in Wampus. The Byram Hills district placed first at the 2006 National Academic Championship, and H.C. Crittenden is the winner of the National Blue Ribbon award.

Athletics at the high school have seen success in the lacrosse,soccer, track, basketball and baseball teams. In 2001 and 2006, the soccer team finished second in the state tournament for Class A. In 2007, the team won the first team state championship in school history.

The Byram Hills track team finished second among class B teams at the cross country state meet in the fall 2006 season. In the 2006–2007 indoor season, they finished fifth at the Nike indoor national meet in the 4×800 relay. In the spring 2007 season, they set Section One records in the 4×1600 relay and the distance medley relay. They placed third at the Nike Outdoor National meet, while on player finished second individually in the 2000m steeplechase. The team won eighteen All New York State honors and thirteen All America honors in two years. In 2011, the Byram Hills basketball team won the Section 1 title and lost in the state Final 4. In 2015, the Byram Hills baseball team captured the Class A State Championship. The 2015 Byram Hills Baseball team now joins the 2007 Soccer Team as the only two Byram Hills High School State Champions across almost 50 years of athletic history.

Notable current and former residents of Armonk include:

All content from Kiddle encyclopedia articles (including the article images and facts) can be freely used under Attribution-ShareAlike license, unless stated otherwise. Cite this article:
Armonk, New York Facts for Kids. Kiddle Encyclopedia.