The Kensico Reservoir is a reservoir located in the towns of Armonk (North Castle) and Valhalla (Mount Pleasant), New York. The Kensico Reservoir was formed by the old earth and gravel dam, built in 1885, which impounded waters from the Bronx and Byram rivers, and supplied about 18 million gallons daily. The construction of a new masonry dam in 1915, replaced the old dam, and expanded the water supply by bringing water from the Catskill Mountains over a distance of more than 100 miles. It is about 3 miles (5 km) north of downtown White Plains, New York, and about 15 miles (24 km) north of New York City. The reservoir serves mainly to store the waters received from the Catskill Mountains west of the Hudson River. Along with the West Branch Reservoir and Boyds Corner Reservoir, it is one of only three reservoirs within the Catskill/Delaware system outside the Catskill Mountains region.

The Kensico Reservoir also provides for fishing and boating recreation. Every year, the reservoir is stocked with over 2,000 brown trout. According to the Department of Environmental Conservation, the Kensico Reservoir was stocked in April 2016 with 8,620 brown Trout 8.5 to 9.5 inches (22 to 24 cm) long.

As the population of New York City grew in the 19th century, so did the need for water. The first use of water from Westchester County came from the old Croton Dam (forming what was called Croton Lake), which was completed in 1842. In the 1880s, the City faced increasing demands for water and therefore needed to enlarge the Croton Reservoir to meet that need. The enlargement of the Croton Reservoir (with the construction of the New Croton Dam and the forming of the New Croton Reservoir) was completed in 1906 as a part of a system of reservoirs designed to bring water from Putnam and Westchester Counties (the Croton Watershed) to New York City.

The village of Kensico, New York, was named in 1849 for a Siwanoy Indian chief, Cokenseko, who had sold most of the land surrounding White Plains to English settlers in the 1600s. In 1885, the old Kensico Dam was built south of the village of Kensico, NY as an additional source of water for New York City. The earth and gravel dam formed a small lake from water supplied by the Bronx River and the Byram River, but it was still not enough for the ever-increasing population of New York City. A reservoir was needed that would contain waters from various new reservoirs and act as a holding tank for distribution to New York City.

Kensico was surrounded by hills that came to a natural V-shape making it an ideal area to hold a vast amount of water. Just to the south of Kensico was Rye Pond and Little Rye Pond in Harrison, New York, which would eventually form part of the new reservoir. A nearby quarry in Harrison bordering Cranberry Lake, provided the necessary materials for building the new dam. Although Kensico had a population of about 200 people, Kensico had houses, stores, churches, hotels and a railroad station.

In 1905, legislation was passed by New York State to allow money to be raised for the building of the Kensico Reservoir. The next year, final planning by the state was approved, and preliminary surveys were started. Seventeen miles of railroad track were privately built to carry materials from quarries at nearby Cranberry and Silver Lakes to the dam site; this spur railroad and a highway network had to be built to move supplies into place. A camp for the workers and their families had to be constructed, along with facilities such as schools for their children.

To prepare for the dam construction, each individual lot of land was condemned and appraised, and the owner paid a "fair value" for the land. Many of the families had to move to such surrounding communities as Armonk, Harrison, Valhalla, and White Plains. The village of Kensico was then flooded to make way for the reservoir.

After the events of September 11, 2001, the road running across the top of the Kensico Dam was closed to all automobile traffic, for fear of an attempt to destroy the dam. A breach of the dam would result in a diminished supply of water to New York City and the flooding of many communities in Westchester. On September 11, 2005, a 9/11 memorial was completed and dedicated in the dam plaza. The memorial is dedicated to the 109 Westchester County residents who died in the attack. The roadway was reopened in May 2012 to pedestrian and bicycle traffic only. 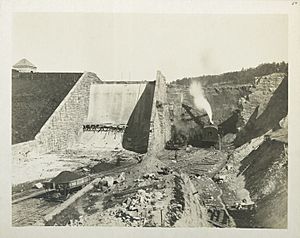 Old Kensico Dam being removed in 1911 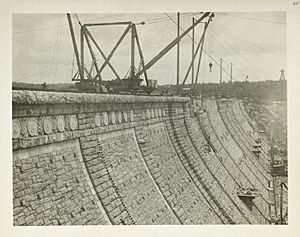 Kensico Dam Under Construction in 1915

Before constructing the existing Kensico Dam, the old Kensico Dam had to be removed; this began in 1911. The construction of the dam began in 1913 and was concluded in 1917—three years ahead of schedule—at a cost of more than $15,000,000. The dam is 1,843 feet (562 m) long. It stands 307 feet (94 m) above its foundation and contains 1 million cubic feet (28,000 m3) of masonry—as much masonry as the Egyptians used to build some of the pyramids. In one month, 2.5 million cubic yards of concrete were poured into blocks, which had to cure for three months before being swung onto the rising hyperbolic pile of dam. The dam is able to hold back about 30 billion US gallons (110,000,000 m3) of water.

Frank E. Winsor was the engineer in charge of construction of Kensico as well as Hillview Reservoir and 32 miles (51 km) of the Catskill Aqueduct.

New York City’s main contractor built a work camp at nearby Valhalla for the 1,500 men who worked on the dam at the height of construction. The water supply board created a mounted police force to keep order. Crews were largely made up of Italian immigrants, who began the long task of digging straight down to a depth of 110 feet (34 m) to reach solid rock with no water-bearing seams. This entailed months of blasting and a number of fatal accidents. As the aqueduct neared completion in 1913, the work gangs at Kensico began laying the first of the concrete bricks of which the dam is built.

The tremendous influx of workers provided a period of prosperity for the surrounding area. New stores, rooming houses, hotels, restaurants and saloons met the needs of the workers and their families. Many of the construction families remained in the area after completion of the dam, contributing to the growth and character of Valhalla and its environs. The Kensico Reservoir was acquired as parkland in 1963 from the New York City Watershed Commission and remains the property of the New York City Department of Environmental Protection. Kensico Dam Plaza is a Westchester County Park. 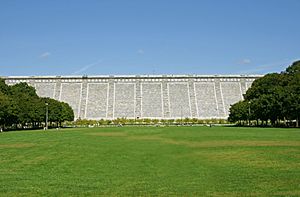 The resulting body of water has a drainage basin of only 13 square miles (34 km2), and holds 30.6 billion US gallons (116,000,000 m3) of water at full capacity. The reservoir itself provides only 2% of NYC's water supply; the rest of the water comes from the reservoirs to which it connects. The water in the reservoir either provides NYC with water, or it travels down the spillway at the southernmost dam, and continues down the rest of the Bronx River, eventually flowing to the East River.

The water that does supply New York City travels down either the Catskill Aqueduct or the Delaware Aqueduct. If it goes down the Delaware Aqueduct, it will pass through Yonkers, and flow through the Hillview Reservoir. It then continues through The Bronx, Manhattan, Brooklyn, and then stops at Staten Island. If it flows through the Catskill Aqueduct, It will stop at the Hillview Reservoir, and continue on through The Bronx, Queens, Brooklyn, and then stop at Staten Island.

Kensico Reservoir sustains an active population of gamefish, supplemented by stocking, including brown trout, lake trout, smallmouth bass, largemouth bass, perch, and grass pickerel. The size and depth of the reservoir allow Lake Trout in particular to thrive. Shore fishing is practiced in many areas, and boating is restricted to DEC licensed and inspected aluminum rowboats. No motor-boats of any kind are permitted on the reservoir, nor are recreational watercraft such as kayaks, rafts, or canoes. 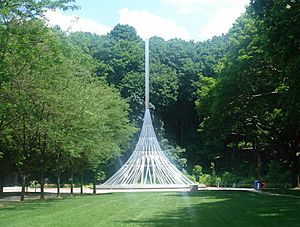 The Rising 9/11 Memorial in the Kensico Dam Plaza includes the surrounding areas through its open structure.

Modern use of the dam is as a public park. Within the park at Kensico Dam Plaza, Westchester County has public showings of movies. The park provides a unique setting for a wide variety of activities including ethnic celebrations, concerts, antiques shows and arts and craft shows, as well as areas for picnicking, in-line skating, walking and nature study.

There are many recreational activities to do at the Kensico Dam Plaza. There is an annual Fourth of July celebration with fireworks, food trucks and live music. Carpooling is heavily recommended for this event due to the crowd that gathers every year. Surrounding streets, such as Columbus Avenue, where many other souvenirs for the public are sold, are closed off due to the mass appeal. Also, there is an annual event named Winter Wonderland, which has food trucks, rides, and other attractions daily like the ice-skating rink.

The Plaza provides many opportunities for fun daily recreational activities, such as a playground and an exercise area for hikers. There are also many signs posted throughout the Plaza, encompassing the history of the dam, fun activities for children, and exercise activities.

Kensico Dam Plaza is also home to The Rising, a memorial dedicated to the victims of the 9/11 terrorist attacks who were from Westchester County. This memorial displays the names of the victims on the granite surrounding the main structure. The main structure of the memorial is made of steel rods that come together and point to the sky. Visitors can interact with the memorial by going inside the structure. The Rising is where the annual 9/11 commemoration takes place at Kensico Dam Plaza, a ceremony honoring the Westchester residents who lost their lives that day.

All content from Kiddle encyclopedia articles (including the article images and facts) can be freely used under Attribution-ShareAlike license, unless stated otherwise. Cite this article:
Kensico Reservoir Facts for Kids. Kiddle Encyclopedia.