Valhalla is a hamlet and census-designated place (CDP) located within the town of Mount Pleasant, in Westchester County, New York, United States. Its population was 3,162 at the 2010 U.S. Census. The name of the community was inspired by a fan of the opera composer Richard Wagner, and the celebrated status of this hamlet comes primarily from its location as the burial places of the remains of numerous well-known people. The name comes from Valhalla, a heavenly abode in Norse mythology.

Valhalla gained its name when it was necessary to name a new U.S. post office in the 19th century, due to the flooding of a pre-existing town and post office, Kensico, which is now underneath the lake created by the Kensico Dam (a part of the New York city water supply system). According to local historians and published works, the wife of a postmaster was a devoted fan of the works of the composer Richard Wagner, and she shared that composer's interest in Norse mythology. Her preference led to the choice of the name "Valhalla", after the heavenly paradise of slain warriors in that mythology. It is most generally agreed that Xavier Reiter, a French horn player with the Metropolitan Opera Orchestra, a Wagner devotee, suggested that the post office name of "Valhalla" be adopted. The village still maintains its association with death through noted people who were buried in its cemeteries. 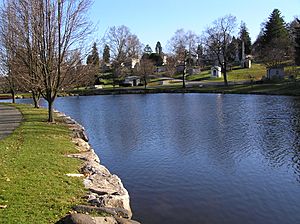 The Kensico Cemetery was founded in 1889 in Valhalla at a time when many of the cemeteries in the city of New York were filling up, and several rural cemeteries were founded near the railroads that served the metropolis. Initially 250 acres (100 ha) in size, the cemetery was expanded to 600 acres (2.4 km2) in 1905, but reduced to 460 acres (1.9 km2) in 1912, when a portion of its land was sold to the neighboring Gate of Heaven Cemetery.

The Kensico Cemetery is the final resting place of the actress Billie Burke, who played Glinda, the "Good Witch of the North", in the classic film The Wizard of Oz. Also interred within Kensico Cemetery and Gate of Heaven Cemetery are the big band leader Tommy Dorsey; the New Yorker cartoonist Peter Arno; the former CBS News president Fred Friendly; the legendary New York Yankees star Lou Gehrig; the film star and comedian Danny Kaye; the comedian and TV pioneer Soupy Sales; the virtuoso pianist, composer, and conductor, Sergei Rachmaninoff; the author Ayn Rand; NBC founder David Sarnoff; artist Robert De Niro, Sr.; and the first Chief Scout Executive of the Boy Scouts of America, James E. West. It is also where the remains lie of Herbert Howard Booth, the son of the Salvation Army founder William Booth, who was the founder of the Salvation Army Musical Department. Giovanni Turini, a sculptor from Italy, who was born in 1841 and died in 1899, made the statue of Giuseppe Garibaldi, a man he served in the fighting surrounding the unification of Italy, in Washington Square, and also the bust of Giuseppe Mazzini in Central Park is buried there, as is actress Anne Bancroft (Brooks) (Born: September 17, 1931 – Died: June 6, 2005). It is also the resting place of Harriet Quimby, America's first certified female pilot. Famous Pakistani delegate to the United Nations, Professor Syed Ahmed Shah Bukhari also known by his pen name Patras Bokhari is also buried there.

On July 12, 2006, the Westchester tornado, an F2 event, touched down in nearby Hawthorne and proceeded to move into Valhalla, causing much destruction in the Stonegate section of the community. This was one of the strongest tornadoes the area had ever seen, as tornadoes of this magnitude are mostly in the Midwest. Power lines were knocked down, and hundreds of trees were uprooted. There were no deaths, but much of Valhalla changed as a result.

In July 2007, Valhalla hosted the opening ceremony of the 2007 Empire State Games. The ceremony was held at the Kensico Dam honoring the athletes and their families and was attended by Governor Eliot Spitzer among other politicians. ESPN's Jeremy Schaap was a keynote speaker.

On February 3, 2015, in the Valhalla train crash, a Metro-North train crashed into a Mercedes-Benz SUV that was crossing the tracks at Commerce Street near the Taconic State Parkway. The crash caused six deaths and 15 injuries, including seven serious.

According to the United States Census Bureau, the hamlet has a total area of 0.81 square miles (2.1 km2), all of it land. 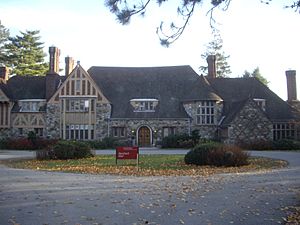 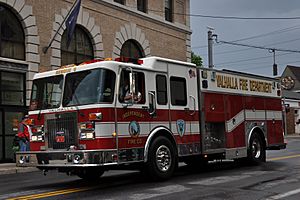 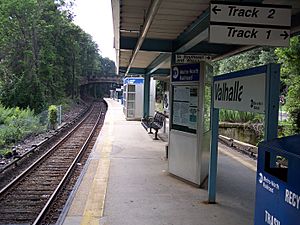 Valhalla is the location of the Mount Pleasant Town Hall as well as the Mount Pleasant Town Pool and Community Center. The main street in Valhalla is Columbus Avenue, which runs the length of the hamlet. Along this road is the Valhalla train station, the Kensico Dam, and Holy Name of Jesus Church, as well as shops and restaurants. The Valhalla ZIP Code (10595) includes portions of the towns of Mount Pleasant, Greenburgh and North Castle. The hamlet is bordered by the North White Plains area of North Castle, the northernmost portion of the town of Greenburgh, and the hamlets of Thornwood and Hawthorne, both within Mount Pleasant. The Valhalla School District, comprising parts of the three towns, is served by the Virginia Road Elementary School, located in the southernmost part of the hamlet in Greenburgh, and the Kensico School and Valhalla Middle and High Schools, all located along Columbus Avenue in Mount Pleasant. Some residents with Valhalla addresses are in the Mount Pleasant Central School District, served by Westlake High School in Thornwood. The Valhalla train station is located right off the Taconic State Parkway, across from the hamlet's commercial center. The train station is the next major stop of Metro-North Railroad after North White Plains.

The John A. Hartford House was added to the National Register of Historic Places in 1977 as a National Historic Landmark. It serves as administrative offices of SUNY Weschester Community College.

Valhalla has a large Italian-American population. As of the 2000 U.S. Census, 34.2% of residents were of Italian ancestry, the 28th highest number of Italian-Americans per capita of all communities in the United States.

There were 1,847 households out of which 33.5% had children under the age of 18 living with them, 69.2% were married couples living together, 7.8% had a female householder with no husband present, and 20.4% were non-families. 16.9% of all households were made up of individuals and 7.7% had someone living alone who was 65 years of age or older. The average household size was 2.83 and the average family size was 3.20.

As noted above, Valhalla's population was 3,162 at the 2010 U.S. Census, an apparent decline of 2,217 that may reflect the impact of the 2006 tornado, but more likely due to redrawing of CDP borders, which can change from one census to the next.

All content from Kiddle encyclopedia articles (including the article images and facts) can be freely used under Attribution-ShareAlike license, unless stated otherwise. Cite this article:
Valhalla, New York Facts for Kids. Kiddle Encyclopedia.