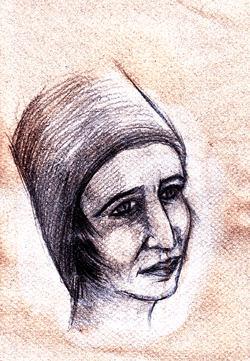 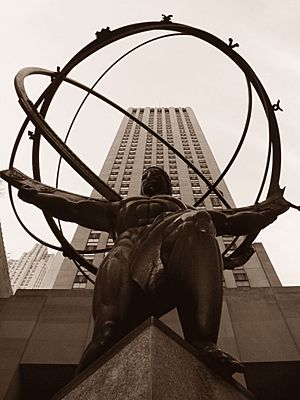 She published several popular books in the United States during the mid-1900s, including her two best-selling novels, Atlas Shrugged and The Fountainhead, plus We the Living and Anthem. Her novels promoted a viewpoint of laissez-faire capitalism as a political and social goal. It is a kind of political philosophy known in the U.S.A. as libertarian conservatism. She called this philosophy 'objectivism'.

Her husband was American actor and artist Frank O'Connor.

Rand was born in St. Petersburg, Russia and grew up during the Russian Revolution, in the years after World War I. She left Russia to visit relatives in Chicago in the United States when she was 21 years old. She did not want to return to live under Communism, and stayed in the US. She changed her name, partly to protect her family in Russia. Rand moved to California to become a movie writer.

Movies at the time did not have sound, and stories were mimed on camera. Dialogue was not important, so Rand could write simple stories while she improved her English language skills.

Rand met Frank O'Connor on a movie set, when they both appeared as extras. When O'Connor married Rand in 1929, she could live permanently in America. She later became an American citizen. O'Connor gave up his acting career, to work full-time so Rand could write full-time. Later he retired, when Rand's work made a good income. He began painting late in his life. He died in 1979.

Rand was a longtime tobacco smoker. She had lung cancer, but she recovered from the disease after surgery. She died of cardiovascular disease in New York City on March 6, 1982.

Rand's first book was We the Living. It is about life in Russia during and after the Russian Revolution, and how life in the later Soviet Union destroys the dreams and hopes of its main characters, who are mostly young people.

Her second book was Anthem, which is a science fiction novella, a dystopian story about a man named Equality 7-2521 who lives in a future society. In that place, everybody is given their name by the government, and nobody can use the words "I" or "me". He escapes from this society with a partner, to live freely in a house in a hidden place.

Her stage play Woman on Trial (better known as Night of January 16th) used audience members as a jury, to decide the play's outcome (by voting the lead character guilty or not guilty) each time it was performed. Some celebrities, such as Helen Keller, appeared as jury members.

Her fourth novel was Atlas Shrugged. It is her longest book. It was also a best-seller. It tells a story about a worldwide economic crisis. This is caused by the best minds in business, industry, and science, and after a while all thinking people, quitting their jobs and disappearing. This is a protest against government regulations that get in the way of their work or make it harder to do.

The more that governments get in the way, the worse conditions become, until society collapses. A new future begins when the people who disappeared return, and governments adopt laissez-faire principles, that do not try to control how businesses work, or misuse innovations.

After writing Atlas Shrugged, she wrote non-fiction books about her Objectivist ideas. She published The Objectivist Newsletter, which then became The Objectivist magazine, with contributions by other writers. She also published The Ayn Rand Letter, a later newsletter about her ideas. Rand's views are typical libertarian–conservative views. Freedom of the individual, the evils of 'large' government, the economic benefits of low taxes and 'small' government, the 'open' society: these are values which run through all her work.

Rand invented a philosophy that she called "Objectivism". She was against communism, socialism, and collectivism, which are political systems where a community or the government of a country takes charge of distribution of that country's goods and products.

She opposed altruism, which she viewed as a form of self-sacrifice. She favored a form of rational selfishness.

She also thought that countries should have very small governments. Rand did not think that welfare payments to poor people were a good thing, because this involves using force to take money away from others. She believed that charity (giving money away) could be a good thing if the person giving the money wanted and chose to do it, but she did not think that people should be expected or forced to give away their money.

She was against religion, and was an atheist.

All content from Kiddle encyclopedia articles (including the article images and facts) can be freely used under Attribution-ShareAlike license, unless stated otherwise. Cite this article:
Ayn Rand Facts for Kids. Kiddle Encyclopedia.