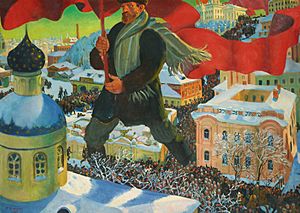 The October Revolution refers to the seizing of power in Russia by the Bolsheviks led by Vladimir Ilyich Lenin and Leon Trotsky. The Bolsheviks overthrew the Russian Provisional Government. The revolution started on November 7 (October 25 o.s.), 1917.

In reality the Bolshevik insurgents faced little or no opposition. The insurrection was timed and organized to hand state power to the Second All-Russian Congress of Soviets of Workers' and Soldiers' Deputies, which began on 25 October. After a single day of revolution eighteen people had been arrested and two had been killed. The Bolsheviks captured telegraph and telephone offices, railway stations, newspaper offices and government institutions. The insurrection was carried out by Red Guards (armed workers), sailors from the Baltic fleet, and revolutionary sections of the army.

All content from Kiddle encyclopedia articles (including the article images and facts) can be freely used under Attribution-ShareAlike license, unless stated otherwise. Cite this article:
October Revolution Facts for Kids. Kiddle Encyclopedia.