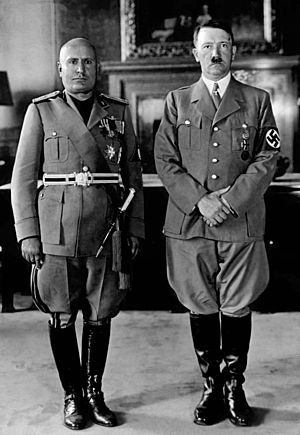 Benito Mussolini (left) and Adolf Hitler (right), the leaders of Fascist Italy and Nazi Germany respectively, were both fascists.

Fascism is a right-wing form of government in which most of the country's power is held by one ruler. Fascist governments are usually totalitarian and authoritarian one-party states. Under fascism, the economy and other parts of society are heavily and closely controlled by the government. The government uses violence to arrest, kill or otherwise stop anyone it does not like.

Mussolini invented fascism in Italy in the late 1910s and developed it fully in the 1930s. When Hitler came to power in Germany in the 1930s, he copied Mussolini.

Not all scholars agree on what fascism is. Philosopher Jason Stanley of Yale University says it is "a cult of the leader who promises national restoration in the face of humiliation brought on by supposed communists, Marxists and minorities and immigrants who are supposedly posing a threat to the character and the history of a nation." That is, fascism focuses on one person as leader, fascism says communism is bad, and fascism says that at least one group of people is bad and has caused the nation's problems. This group could be people from other countries or groups of people within the country. Under Hitler's fascist Germany, the government blamed Jews, communists, homosexuals, the disabled, Roma and other people for Germany's problems, arrested those people, and took them to camps to be killed.

The name fascism comes from the Italian word fascio for bundle. This word comes from the Latin word fasces which was an axe surrounded by a bundle of sticks. In Ancient Rome, leaders carried the fasces as a symbol of their power.

A journalist named Benito Mussolini invented fascism. He started Italy's fascist party in 1919. He became Italy's prime minister in 1922. He was not elected. His supporters walked into Rome in large numbers, and the king of Italy made him prime minister. Although, officially, the fascist party in Italy was ruled by a "grand council" from 1922 until the end of World War II, Benito Mussolini really had almost all the power in the country.

However, Mussolini also believed that to make fascism work, he and his followers had to remove anything that could distract people from the nation. He also believed he should get to decide who in Italy counted as part of the Italian nation and he should get to throw out or arrest anyone he said did not count as a real Italian. He believed it was right to use violence to remove those distractions and those people. Groups of people with weapons would go out into the streets and beat up or even kill people Mussolini did not like.

Mussolini did not allow journalists to write what they wanted.

Mussolini believed that Italy should be made of white people, so he encouraged white women to have more babies and persecuted people who were not white.

Fascism vs other types of totalitarianism

One of the reasons fascism spread in the early 20th century was because the Russian Revolution had just happened and people were afraid of communism. Sometimes landowners and business owners would support fascists because they were afraid of what would happen if the country became communist instead.

In her work, The Origins of Totalitarianism, published in 1951, Hannah Arendt compared National Socialism, Stalinism and Maoism. She does not talk about these regimes being fascist; according to her, they are totalitarian. In 1967, German philosoper Jürgen Habermas warned about a "left-wing fascism" of a protest movement in Germany of the 1960s, commonly known as Ausserparlametarische Opposition, or APO.

There is more than one reason why people living in democratic states oppose fascism, but the main reason is that in a Fascist government the individual citizen doesn’t always have the option to vote, nor do they have the option to live a lifestyle which may be seen as immoral, useless, and unproductive towards society. If you are not heterosexual (homosexual, cross-dressing, changing genders, etc.) you can be arrested and put on trial.

The fascist governments in Italy and Germany were removed after they lost World War II, but fascism continued as military dictatorships under Salazar in Portugal, Franco in Spain, in some parts of Latin America, Africa, and Asia.

In the 21st century, fascist political movements exist in many countries.

All content from Kiddle encyclopedia articles (including the article images and facts) can be freely used under Attribution-ShareAlike license, unless stated otherwise. Cite this article:
Fascism Facts for Kids. Kiddle Encyclopedia.