Juan Domingo Perón (8 October 1895 – 1 July 1974) was an Argentine Army general and politician. After serving in several government positions, including Minister of Labor and Vice President, he was elected President of Argentina three times, serving from June 1946 to September 1955, when he was overthrown in a revolution and then from October 1973 until his death in July 1974.

During his first presidential term (1946–52), Perón was supported by his second wife, Eva Duarte ("Evita"), and they were immensely popular among many Argentines. Eva died in 1952, and Perón was elected to a second term, serving from 1952 until 1955.

During the following period of two military dictatorships, interrupted by two civilian governments, the Peronist party was outlawed and Perón was exiled.

Juan and Evita Perón are considered icons by the Peronists. The Peróns' followers praised their efforts to eliminate poverty and to dignify labour. The Peróns gave their name to the political movement known as Peronism, which in present-day Argentina is represented mainly by the Justicialist Party. Peronism is not considered a traditional party, but a political movement, because of the wide variety of people who call themselves Peronists. 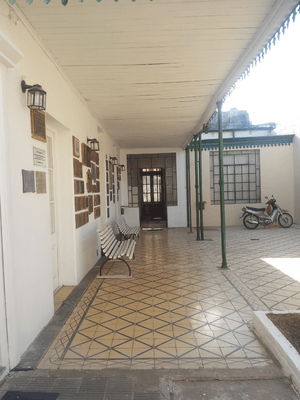 Patio inside the home in Lobos where Perón was born

Juan Domingo Perón was born in Lobos, Buenos Aires Province. Juan was sent away in 1904 to a boarding school in Buenos Aires directed by his paternal grandmother, where he received a strict Catholic upbringing. He then entered the National Military College in 1911 at age 16 and graduated in 1913.

Perón began his military career in an Infantry post in Paraná, Entre Ríos, later onhe went on to command the post. He earned instructor's credentials at the Superior War School, and in 1929 was appointed to the Army General Staff Headquarters. He served as military attaché in the Argentine Embassy in Chile from 1936 to 1938.

Perón was assigned by the War Ministry to study mountain warfare in the Italian Alps in 1939. He also attended the University of Turin for a semester and served as a military observer in countries across Europe. He studied Benito Mussolini's Italian Fascism, Nazi Germany, and other European governments of the time. He returned to Argentina in 1941, and served as an Army skiing instructor in Mendoza Province. 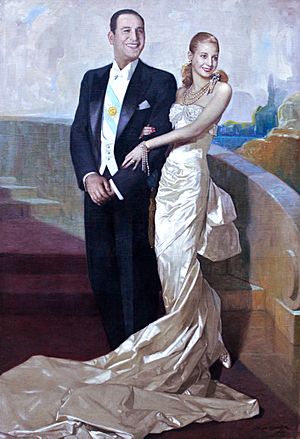 Eva Perón was instrumental as a symbol of hope to the common laborer during the first five-year plan. When she died in 1952, the year of the presidential elections, the people felt they had lost an ally. Coming from humble origins, she was loathed by the elite but adored by the poor for her work with the sick, elderly, and orphans. It was due to her behind-the-scenes work that women's suffrage was granted in 1947 and a feminist wing of the 3rd party in Argentina was formed. Evita supported a women's movement that concentrated on the rights of women, the poor and the disabled.

She established the Eva Perón Foundation in 1948, which was perhaps the greatest contribution to her husband's social policy. The Foundation had 14,000 employees and founded hundreds of new schools, clinics, old-age homes and holiday facilities; it also distributed hundreds of thousands of household necessities, physicians' visits and scholarships, among other benefits.

Among the best-known of the Foundation's many large construction projects are the Evita City development south of Buenos Aires (25,000 homes) and the "Republic of the Children", a theme park based on tales from the Brothers Grimm.

The portion of the five-year plans which argued for full employment, public healthcare and housing, labour benefits, and raises are a result of Eva's influence on the policy-making of Perón in his first term. The humanitarian relief efforts embedded in the five-year plan are also Eva's creation, which endeared the Peronist movement to the working-class people from which Eva had come. 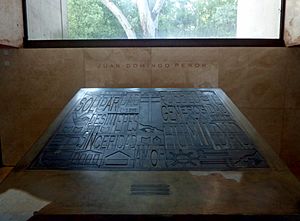 Juan Perón on July 1, 1974, in Buenos Aires. His wife, Isabel, held onto the presidency until a military coup headed by General Jorge Videla removed her from power on March 24, 1976.

Perón was buried in La Chacarita Cemetery in Buenos Aires. On 10 June 1987, his tomb was desecrated, some personal effects, including his sword, were stolen. On 17 October 2006, his was moved to a mausoleum at his former summer residence, rebuilt as a museum, in the Buenos Aires suburb of San Vicente.

All content from Kiddle encyclopedia articles (including the article images and facts) can be freely used under Attribution-ShareAlike license, unless stated otherwise. Cite this article:
Juan Perón Facts for Kids. Kiddle Encyclopedia.