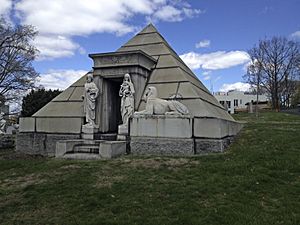 Mausoleum in Brooklyn of a man who loved Ancient Egypt 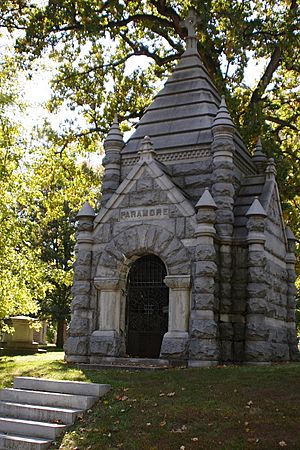 A mausoleum is a building used to store the remains of people who have died. Instead of being buried in soil, like in a cemetery, they are placed in chambers behind walls, or in a vault under the floor. The word came from the name of an ancient king.

Soviet leader Lenin is a mausoleum. In 1953, Joseph Stalin was buried next to him but his body was removed during destalinization.

All content from Kiddle encyclopedia articles (including the article images and facts) can be freely used under Attribution-ShareAlike license, unless stated otherwise. Cite this article:
Mausoleum Facts for Kids. Kiddle Encyclopedia.