Hiram Ulysses Grant was born on April 27, 1822, in Point Pleasant, Ohio. He was the oldest of six children born to Jesse and Hannah Grant. Jesse Grant was a tanner. It was hard smelly work but he made a good living at it. Young Grant worked for his father in the tannery but hated the work. He went to local schools. In 1838 he attended the Presbyterian Academy in Ripley, Ohio. In 1839 he was appointed to the United States Military Academy at West Point. He was not the best student though he was good at math. When he graduated, he was placed in the infantry.

When Grant arrived at West Point and discovered that the Academy had him registered under the wrong name as Ulysses S. Grant, he tried to get the error corrected. He was told that it didn't matter what he or his parents thought his name was, the official government application said his name was "Ulysses S." and that application could not be changed. If Hiram Ulysses Grant wanted to attend West Point, he would have to change his name.

Before becoming the president, Grant was an officer in the Union Army (North). He fought in the Mexican War and became a general at the start of the American Civil War. He served as head of the Army of Tennessee and won victories at Shiloh, Vicksburg, and Chattanooga. He became the top general in the Union Army from 1864 to 1865, and fought several battles against Robert E. Lee.

Since he was able to do well fighting in the American Civil War, he gained popularity which helped him to become president. Even though he was a respected general and supported civil rights for African Americans, historians criticize his presidency because he appointed his friends into high political positions and tolerated their corruption (even though Grant himself was innocent). Grant was the first President of the United States to have both living parents attend his inauguration. 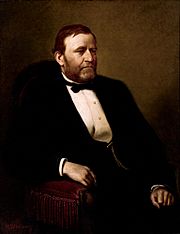 When he accepted the nomination for president by the Republican Party, Grant proclaimed "Let there be peace." The previous administration of Andrew Johnson had been full of debate. Johnson himself only narrowly escaped being removed from office by a single vote. Grant wanted to heal the nation. But he delegated much of his power to his aides. This in turn caused much of his administration to be remembered for its corruption even though Grant himself was honest.

Shortly after his election, Wall Street dealers James Fisk and Jay Gould tried to cornering the market in gold. They were aided by Grant's brother-in-law Abel Corbin, who convinced them the president would go along with their scheme to control gold prices. Actually, Grant knew nothing about this and Corbin was just trying to get in on the illegal profits that could be made. When the president learned what was going on, he ordered the sale of $4 million in gold held by the Federal government. This caused the price of gold to go down and almost bankrupted Fisk and Gould. But worse scandals were to follow.

During his first term, Grant did have some modest success. The national debt from the Civil War was reduced. All former Confederate states were re-admitted to the Union. Grant sent Federal troops to the South to fight against the Ku Klux Klan, whose ranks had been filled with Southerners bitter over blacks being able to vote and hold public office. Grant also publicly took steps to reform the system of patronage in use at the time. For the first time, a Civil Service Commission was appointed which made recommendations for reform. People would get government jobs based on their qualifications not on who they knew or who owed them a favor. In 1872 Grant put these recommendations into effect but Congress refused to pass any laws making these changes permanent. 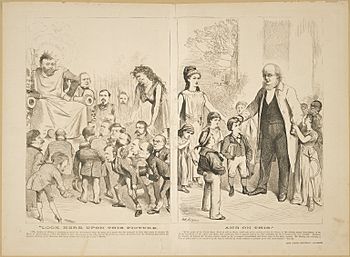 In 1872, Republican reformers split the party and nominated Horace Greeley to be president. The Democratic Party also nominated him. Greeley wanted Civil Service reform and amnesty for all former Confederates. Grant won the election by a landslide.

Very soon into Grant's second term the Panic of 1873 started a depression in the United States that spread to Europe. In 1873, Republicans in Congress were caught in a bribery scandal by newspapers. They had collected large bribes to give large federal grants to the railroads. The bibes had taken place before Grant was president, but the news came out during his presidency making it seem even more corrupt. Also in 1873, Grant signed a bill that gave himself and congressmen a pay raise. The press attacked him for it calling it a money grab. Republicans were getting a bad reputation in the press. Mid-term, the Democrats won a majority of votes in the House. They started a number of congregational investigations. Grant's Secretary of the Treasury had to resign after being caught in a fraud scheme involving taxpayer kickbacks.

The Whiskey Ring was the largest scandal and involved widespread fraud. Grant had appointed an army friend John MacDonald as an Internal Revenue Service supervisor for the St. Louis area. In return for bribes, whisky distillers paid taxes only on a small portion of the whiskey they produced. They were cheating the U.S. government out of millions of dollars a year. MacDonald kept some of the money while some of it went to the Republican Party. The Whiskey Ring was paying some officials a regular salary to keep them from talking. Benjamin Bristow, the Secretary of the Treasury at the time, had no idea this was going on. Each time he sent inspectors on a raid to check out suspected cheaters, their records were always in good order. Bristow had no idea someone in his office was telling them in advance who was to be inspected. Meanwhile, Grant accepted expensive gifts from MacDonald not suspecting he was running a fraud scheme. MacDonald even told his friends in St. Louis that Grant was in on the scheme. In 1875, MacDonald and more than 350 distillers and government officials were indicted. This included Grant's personal secretary Orville Babcock. He was the one keeping ring members informed of any inspections. At his trial, witnesses lied and even President Grant wrote a letter stating Babcock was of good character. As a result, Babcock was exonerated of the charges, but the scandal prevented him from going back to his job in Washington. Of those accused, 60 paid fines while MacDonald and two others went to prison. The Whiskey Ring proved to most Americans that Grant's administration was filled with corruption.

After his presidency, Grant was poor and was suffering from throat cancer. He wrote a book about his life that sold millions of copies. He died three days after he finished writing the book. He is buried with his wife Julia in Grant's Tomb, New York City, New York.

All content from Kiddle encyclopedia articles (including the article images and facts) can be freely used under Attribution-ShareAlike license, unless stated otherwise. Cite this article:
Ulysses S. Grant Facts for Kids. Kiddle Encyclopedia.