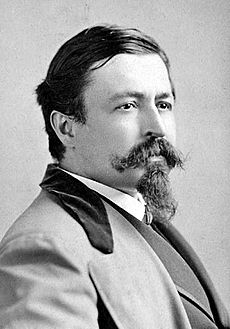 Thomas Nast (September 27, 1840 – December 7, 1902) was a German-American caricaturist and editorial cartoonist who is considered to be the "Father of the American Cartoon". He helped create Uncle Sam and the elephant symbol for the Republican Party and the donkey symbol for the Democratic Party. Targets included Tammany Hall.

Nast was born on September 27, 1840 in Landau, Kingdom of Bavaria, German Confederation. He spent his adulthood in New York City, New York. Nast began working for Harper's Weekly in 1859. He was married to Sarah Edwards from 1861 until his death in 1902. They had five children. Nast died on December 7, 1902 in Guayaquil, Ecuador from complications of a yellow fever, aged 62.

All content from Kiddle encyclopedia articles (including the article images and facts) can be freely used under Attribution-ShareAlike license, unless stated otherwise. Cite this article:
Thomas Nast Facts for Kids. Kiddle Encyclopedia.