James Gillespie Blaine (January 31, 1830 – January 27, 1893) was an American Republican politician. He was a United States Representative. In his time he held office as, the Speaker of the United States House of Representatives, U.S. Senator from Maine, the Secretary of State twice and was also nominated to be President.

Blaine was born on January 31, 1830 in West Brownsville, Pennsylvania. He was the third child of Ephraim Lyon Blaine and his wife Maria Gillespie Blaine. He was educated at Washington College and later met his wife Harriet Stanwood. They married in 1850 and had seven children. 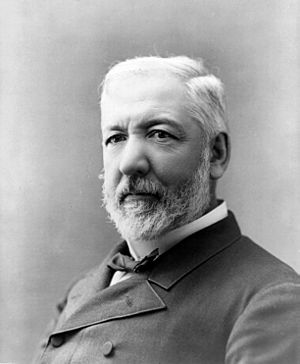 Blaine was a Republican. He was Speaker of the House of Representatives from 1869 until 1875. He was chosen by the 18th United States President Ulysses S. Grant.

On July 2, 1881, Blaine and President James A. Garfield were walking up to the Baltimore and Potomac Railroad in Washington, D.C. when Charles J. Guiteau shot Garfield in the back.

The Republicans nominated Blaine for President in 1884 but Grover Cleveland won the election.

Blaine died just 4 days short from his 63rd birthday on January 27, 1893 in his Washington, D.C. home from a heart attack, aged 62. He was later buried at Oak Hill Cemetery in Washington, D.C. and was later re-buried in Blaine Memorial Park, Augusta, Maine, in 1920.

All content from Kiddle encyclopedia articles (including the article images and facts) can be freely used under Attribution-ShareAlike license, unless stated otherwise. Cite this article:
James G. Blaine Facts for Kids. Kiddle Encyclopedia.