Pago Pago ( Samoan:) is the territorial capital of American Samoa. It is on the main island of American Samoa, Tutuila. The territory is served by Pago Pago International Airport at Tafuna, some 8 miles south west of Pago Pago. Tourism, entertainment, food, and tuna canning are its main industries.

The area commonly referred to as Pago Pago consists of a string of villages, each with its own village council, on the shores of Pago Pago Harbor. One of the villages is itself named Pago Pago, and in 2010 had a population of 3,656. Pago Pago may refer to the village, to the bay area or to American Samoa as a whole. The constituent villages are, in order, Utulei, Fagatogo, Malaloa, Pago Pago, Satala and Atu'u. Fagatogo is the area referred to as Town and was the seat of government until a new Executive Office Building was opened in Utulei. In Fagatoto is the Fono (Legislature), the Police Department, the Port of Pago Pago, many shops and hotels.

From 1878 to 1951, the area was the site of a coaling and repair station for the U.S. Navy, known then as United States Naval Station Tutuila.

In January 1942 Pago Pago Harbor was shelled by a Japanese submarine, but this remained the only battle action on the islands during World War II.

On September 29, 2009, an earthquake struck in the South Pacific, near Samoa and American Samoa, sending a tsunami into Pago Pago and surrounding areas. The tsunami caused moderate to severe damage to villages, buildings and vehicles and caused an unknown number of deaths.

The town is located between steep mountainsides and the harbor. The main downtown area is Fagatogo on the south shore of Pago Pago Harbor, the location of the Fono (territorial legislature), the port, the bus station and the market. The banks are in Utulei and Fagotogo, as are the Sadie Thompson Inn and other hotels. The tuna canneries, which provide employment for a third of the population of Tutuila, are in Atu'u on the north shore of the harbor. The village of Pago Pago is at the western head of the harbor.

A climb to the summit of Mt. Alava in the National Park of American Samoa provides a bird's-eye view of the harbor and town.

Pago Pago has a tropical rainforest (Köppen climate classification Af) climate. All official climate records for American Samoa are kept at Pago Pago. The hottest temperature ever recorded was 99 °F (37 °C) on February 22, 1958. Conversely, the lowest temperature on record was 59 °F (15 °C) on October 10, 1964. 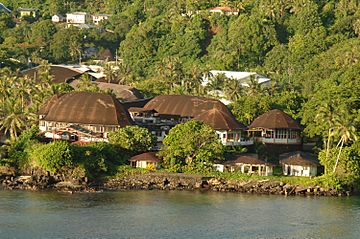 Until 1980, one could experience the view of Mt. Avala by taking an aerial tramway over the harbor, but on April 17 of that year a U.S. Navy plane, flying overhead as part of the Flag Day celebrations, struck the cable; the plane crashed into a wing of the Rainmaker Hotel. The tramway was repaired, but closed not long after. The tram remains unusable, although according to Lonely Planet, plans have been put forth to reopen it, but in December 2010 the cable was damaged by Tropical Cyclone Wilma, fell into the harbor and has not been repaired. Another noted view is that from the top of the pass above Aua Village on the road to Afono.

The Sadie Thompson Inn, on the outskirts of Pago Pago, is a hotel and restaurant that is listed on the U.S. National Register of Historic Places.

All content from Kiddle encyclopedia articles (including the article images and facts) can be freely used under Attribution-ShareAlike license, unless stated otherwise. Cite this article:
Pago Pago Facts for Kids. Kiddle Encyclopedia.