Michael Richard Pence (born June 7, 1959) is an American politician. He was the 48th Vice President of the United States between 2017 and 2021. A lawyer by occupation, he served as Governor of Indiana from 2013 to 2017 and as a member of the United States House of Representatives from 2001 to 2013. A Republican, he chaired the House Republican Conference from 2009 to 2011. Pence is a longtime supporter of the Tea Party movement.

On July 14, 2016, Donald Trump's campaign said that Pence would be Trump's choice for running mate in the 2016 presidential election. The Trump-Pence campaign went on to defeat the Clinton-Kaine campaign in the general election on November 8, 2016. Pence was inaugurated as Vice President of the United States on January 20, 2017.

Pence was born at Columbus Regional Hospital in Columbus, Indiana , He was one of six children of Nancy Jane (née Cawley) and Edward J. Pence, Jr. His family were Irish Catholic Democrats.

Pence graduated from Columbus North High School in 1977. He earned a B.A. in History from Hanover College in 1981 and a J.D. from the Indiana University Robert H. McKinney School of Law in 1986.

After graduating from law school in 1986, Pence worked as an attorney in private practice. He continued to practice law following his second unsuccessful run for Congress.

In November 2000, Pence was elected to the U.S. House of Representatives in Indiana's 2nd Congressional District after six-year incumbent David M. McIntosh (1995–2001) opted to run for governor of Indiana. 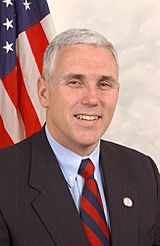 Pence as a representative, 2009 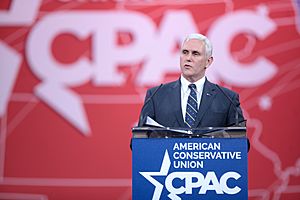 On March 26, 2015, Pence signed Indiana Senate Bill 101, also known as the Indiana "religious objections" bill (RFRA), into law. The law's signing was met with widespread criticism by people and groups who felt the law was carefully worded in a way that would permit discrimination against LGBT persons.

As of March 2016, Pence has attempted unsuccessfully to prevent Syrian refugees from being resettled in Indiana.

Pence is running for a second term as governor. He was unopposed in the May 3, 2016, Republican primary for governor. He faces Democrat John Gregg, former Speaker of the Indiana House of Representatives, in a rematch of the 2012 race. Early reports on July 14 suggest Pence is likely to be announced as the VP candidate on July 15.

Trump would go on to defeat Clinton in the general election making Pence the Vice President-elect of the United States.

Vice President of the United States (since 2017)

Pence was inaugurated as the 48th Vice President of the United States after being sworn in by Associate Justice Clarence Thomas on January 20, 2017.

On January 27, 2017, Pence spoke at the March for Life in Washington D.C., becoming the first vice president and the highest ranking United States official to ever speak at the annual event.

Pence and his wife Karen Pence have been married since 1985. They have three children: Michael, Charlotte, and Audrey. Pence is a born-again Christian. His brother, Greg, is the member of the United States House of Representatives.

All content from Kiddle encyclopedia articles (including the article images and facts) can be freely used under Attribution-ShareAlike license, unless stated otherwise. Cite this article:
Mike Pence Facts for Kids. Kiddle Encyclopedia.