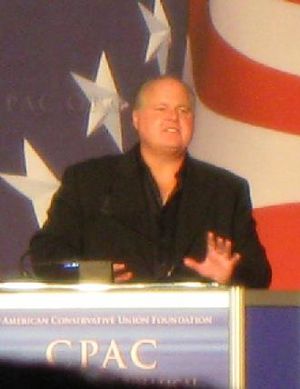 Rush Hudson Limbaugh III (/ˈlɪmbɔː/, LIM-baw; born January 12, 1951) is an American conservative radio talk show host. He is the host of The Rush Limbaugh show where callers can call in and express their opinion. His views have been said to be sexist. He is very controversial.

He is one of the most highly paid people in the US media.

All content from Kiddle encyclopedia articles (including the article images and facts) can be freely used under Attribution-ShareAlike license, unless stated otherwise. Cite this article:
Rush Limbaugh Facts for Kids. Kiddle Encyclopedia.