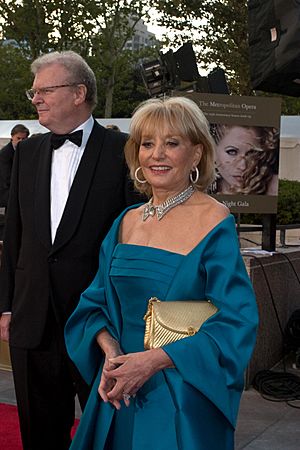 Barbara Walters (born September 25, 1929) is an author and broadcast journalist.

Walters was the news anchor at NBC's Today. For 25 years Walters also hosted the ABC show 20/20. She co-hosted the morning television show The View from 1997 to 2014.

Walter's has interviewed every U.S. President since Richard Nixon.

Walters has received 3 Daytime Emmy Awards. She has received Lifetime Achievement Awards for News and Documentary and daytime programs. She was inducted into the Television Hall of Fame in 1989. On June 15, 2007, Walters received a star on the Hollywood Walk of Fame.

In 1992 Walters received a Courage in Journalism Award for reporting in dangerous areas.

All content from Kiddle encyclopedia articles (including the article images and facts) can be freely used under Attribution-ShareAlike license, unless stated otherwise. Cite this article:
Barbara Walters Facts for Kids. Kiddle Encyclopedia.