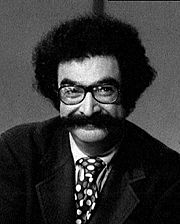 Gene Shalit (born March 25, 1926) is an American movie and book critic. He has been a critic on NBC's The Today Show since January 15, 1973. He is known for his use of puns, his very large handlebar moustache, and for wearing bowties.

He has been reviewing the arts since 1967. He has written for magazines such as Look magazine, Ladies' Home Journal (for 12 years), Cosmopolitan, TV Guide, Seventeen, Glamour, McCall's, and The New York Times. From 1970–1982 he had a daily report on NBC Radio. In 1987, he published Laughing Matters—A Treasury of American Humor, a humor anthology. Since 2009, he lives in Great Barrington, Massachusetts, with his cat Fellini. Shalit's children include the artist and entrepreneur Willa Shalit.

Shalit was born in New York City on March 25, 1926. He later moved to Newark, New Jerseywith his mother. In 1932, he and his family moved to Morristown, New Jersey. Born of Jewish parents, Shalit attended Morristown High School. While thee, he wrote a humor column for the school newspaper.

Gene Shalit wrote for The Daily Illini for six years at the University of Illinois at Urbana-Champaign.

Shalit said that he would leave The Today Show after 40 years, starting November 11, 2010. He was quoted as saying: "It's enough already". Shalit was Dick Clark's press agent in the early 1960s. Shalit stopped representing Clark during a Congressional investigation. Clark has not spoken to Shalit again and said he was a "jellyfish."

All content from Kiddle encyclopedia articles (including the article images and facts) can be freely used under Attribution-ShareAlike license, unless stated otherwise. Cite this article:
Gene Shalit Facts for Kids. Kiddle Encyclopedia.