Reagan was born in Manhattan, New York City. Her parents divorced soon after her birth. She grew up in Maryland. In Maryland, she lived with an aunt and uncle while her mother looked for acting jobs. She was an actress in Hollywood during the 1940s and 1950s. She starred in movies such as, Donovan's Brain, Night Into Morning and Hellcats of the Navy.

In 1952, she married Ronald Reagan who was then president of the Screen Actors Guild. They had two children, Ron and Patti. Reagan was the First Lady of California when her husband was Governor from 1967 to 1975. She became part of the Foster Grandparents Program.

Nancy Reagan became First Lady of the United States in January 1981 after her husband's election. She was criticized in his first term due to her decision to replace the White House china. Her interest in high-end fashion had much attention and criticism. She created the anti-drug campaign, "Just Say No" during her husband's presidency.

She always protected her husband and controversy occurred when it was revealed in 1988 that she had hired an astrologer to assist in planning the president's schedule after the 1981 assassination attempt on her husband. She had a strong influence on her husband. She played a role in a few of his personnel and diplomatic decisions.

The Reagans left the White House in 1989. Nancy devoted most of her time to caring for her ill husband who was diagnosed in 1994 with Alzheimer's disease until his death in 2004. Nancy Reagan remained active within the Reagan Library and in politics. Until her death, Reagan supported and advocated stem cell research.

She was born in Manhattan, New York City. Her birthname was Anne Frances Robbins. The names of her parents were Kenneth Seymour Robbins and Edith Luckett. Edith Luckett was an actress. When Nancy was six years old, her mother married Dr. Loyal Davis. Dr. Loyal Davis was a neurosurgeon. Dr. Davis adopted Nancy as his daughter when she was 16 years old. She changed her name to Nancy Davis because of this. She spent her childhood in Chicago, Illinois. She was also goddaughter of Russian-born silent movie star Alla Nazimova. Nancy studied at Girls' Latin School and at Smith College in Massachusetts. From Smith College, she was good in theater.

After her graduation, she became an actress. She acted in many plays and movies. One of them was the hit musical Lute Song. She became famous as Nancy Davis. She had roles in eleven movies from 1949 to 1956. In a movie named Hellcats of the Navy (1957), she played a role. In the movie she co-starred along with her husband Ronald Reagan. Her last movie was 1958's Crash Landing. After this, she appeared in television dramas until 1962. After 1962, she retired as an actress. 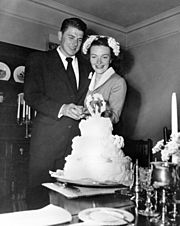 She met Ronald Reagan in 1951. At that time Reagan was the president of the Screen Actors Guild (SAG). Another actress with the same name (of Nancy) had appeared in a Hollywood blacklist. This name confusion had created problems for Nancy. Anyone with his or her name in the Hollywood blacklist was unable to get any work in any movie. As she would not get any roles due to the name in the Hollywood blacklist, she met Reagan to clear this issue. Over a period of time, they came closer to each other. They married on March 4, 1952 in Los Angeles, California. Nancy once remembered: "My life really began when I married my husband."

The Reagans had two children. She gave birth to a daughter Patti Davis on October 21, 1952, seven months after the couple's wedding. She gave birth to a son named Ron Reagan on May 20, 1958. Nancy Reagan is also stepmother to Michael Reagan and the late Maureen Reagan. Michael and Maureen were the children of Ronald Reagan's first marriage to actress Jane Wyman.

The officials of the fire department had described official residence of the Governor in Sacramento, California as a “firetrap”. She then made Reagan and the whole family move to a wealthy suburb. Some people thought moving the governor's mansion was a bad idea.

She was very active as the First lady of California. She visited war veterans, the elderly people, and the handicapped people. She also worked with many groups working for charity. One such program was the Foster Grandparent Program. She continued her part with the Foster grandparent program when she came to Washington, D.C. as the First Lady of the United States. 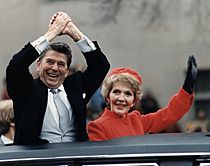 When Ronald Reagan became President of the United States in 1981, Nancy Reagan began her role actively as the First Lady. 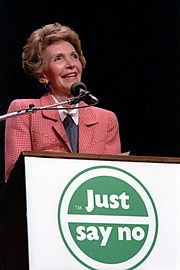 In her early years as the First Lady, a private foundation purchased new dishware for the White House. The cost was $ 200,000. This attracted bad publicity, as the US economy was facing recession at that time. She also used expensive fashion. This also attracted bad publicity sometimes. However, once in 1982 at Gridiron Club, she dressed in ragged clothes and sang "Second-Hand Rose". This made Nancy more popular.

Nancy Reagan took close interest in the affairs of the White House. Some people believe that she helped her husband make major decisions at the White House. People also remember her for conservative fashions. Her fashion was copied by many women of her time. She was also against use of drugs by young persons.

In October 1987, physicians found that Nancy Reagan had breast cancer. She underwent an operation, mastectomy.

In 1983 Reagan, Henry Kissinger (former Secretary of State) and philanthropists Barbara and Marvin Davis, appeared in an episode of the very popular soap opera Dynasty (TV series). In addition, Reagan appeared as herself in an episode of the popular sitcom Diff'rent Strokes. She appeared on Diff'rent Strokes for her support for her "Just Say No" anti-drug campaign which she created. 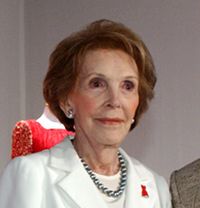 In 1991, Kitty Kelley wrote a book about her. The book’s name is Nancy Reagan: The Unauthorized Biography. The book became very famous and sold many copies. The book gives certain details like the former First Lady's association with astrology. It also talked about her White House meetings with Frank Sinatra.

She spent much of her time caring for her husband who was suffering from Alzheimer's disease. Ronald Reagan died in their Bel Air home on June 5, 2004. She asked President George W. Bush to support research in the hopes that such research would lead to a cure for Alzheimer's disease.

In 2005 she had gone to London to visit Margaret Thatcher and Charles, Prince of Wales. There she slipped over in her hotel room and had to undergo treatment in a hospital.

Following her husband's diagnosis and death, Nancy became a stem-cell research advocate. She urged Congress and President George W. Bush to support federal funding for embryonic stem cell research. President Bush opposed the idea. In 2009, she praised President Barack Obama for lifting restrictions on such research. Mrs. Reagan has said that she believes that it could lead to a cure for Alzheimer's.

Reagan died on March 6, 2016 in her home in Bel Air, Los Angeles. She died of congestive heart failure. Reagan was aged 94. She was buried next to her husband at the Ronald Reagan Presidential Library on March 11.

All content from Kiddle encyclopedia articles (including the article images and facts) can be freely used under Attribution-ShareAlike license, unless stated otherwise. Cite this article:
Nancy Reagan Facts for Kids. Kiddle Encyclopedia.