Michelle LaVaughn Robinson Obama (born January 17, 1964) is a former First Lady of the United States and the wife of the 44th president of the U.S., Barack Obama. She is also a lawyer and an author. She is the first African American First Lady of the United States. Like many other First Ladies, Mrs. Obama has worked as a spokesperson for a cause. The cause she supports is better nutrition and exercise for children. She has done work with the Disney Channel and Nickelodeon to support this cause. 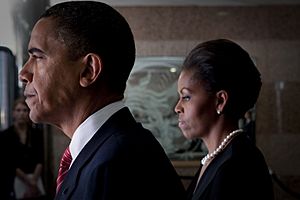 Robinson's childhood home was on the upper floor of 7436 South Euclid Avenue in Chicago's South Shore community area, which her parents rented from her great-aunt, who had the first floor. She was raised in what she describes as a "conventional" home, with "the mother at home, the father works, you have dinner around the table". Her elementary school was down the street. She and her family enjoyed playing games such as Monopoly, reading, and frequently saw extended family on both sides. She played piano, learning from her great-aunt, who was a piano teacher. The Robinsons attended services at nearby South Shore United Methodist Church. They used to vacation in a rustic cabin in White Cloud, Michigan. She and her 21-month-older brother, Craig, skipped the second grade.

Her father suffered from multiple sclerosis, which had a profound emotional effect on her as she was growing up. She was determined to stay out of trouble and be a good student, which was what her father wanted for her. By sixth grade, Michelle joined a gifted class at Bryn Mawr Elementary School (later renamed Bouchet Academy). She attended Whitney Young High School, Chicago's first magnet high school, established as a selective enrollment school, where she was a classmate of Jesse Jackson's daughter Santita. The round-trip commute from the Robinsons' South Side home to the Near West Side, where the school was located, took three hours.

Michelle recalled being fearful of how others would perceive her, but disregarded any negativity around her and used it "to fuel me, to keep me going". She recalled facing gender discrimination growing up, saying, for example, that rather than asking her for her opinion on a given subject, people commonly tended to ask what her older brother thought. She was on the honor roll for four years, took advanced placement classes, was a member of the National Honor Society, and served as student council treasurer. She graduated in 1981 as the salutatorian of her class.

Michele Obama became a lawyer after graduating from law school. While working at the law firm Sidley Austin, she met her future husband.

In 1991, she left the company to work in the mayor's office as an Assistant to the Mayor, then she pursued various jobs outside the city including executive director, associate dean and executive vice president.

After her husband’s inauguration, she focused on lifestyle and fitness, and she launched the Let’s Move campaign to eliminate childhood obesity. Her approval rating was 71% in March of 2010. 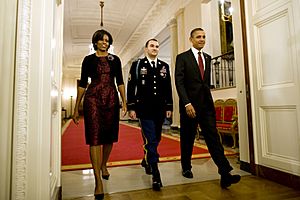 Obama with her husband and Salvatore Giunta

She met Barack Obama when they were among the few African Americans at their law firm, Sidley Austin LLP. She was assigned to mentor him while he was a summer associate. Their relationship started with a business lunch and then a community organization meeting where he first impressed her.She and Barack Obama were married on October 3, 1992, and they have two children, Malia (born July 4, 1998) and Sasha (born June 10, 2001).

For a long time, she lived in Chicago with her family. Then, her husband became a junior Senator for the State of Illinois. After that, he ran for president of the USA and won. Michelle became the First Lady of the United States and lived in the White House with her husband and two children. Her husband was elected on November 6, 2012, to a second term as president, so she served as First Lady until January 20, 2017.

On September 17, 2014, Obama visited St. Jude Children's Research Hospital in Memphis, Tennessee. Kids there asked her questions. She said when she was asked who in her family that she liked to prank the most that her husband was the person, also saying they love to scare each other. Their daughters also try to scare them. She also said the Truman Balcony is her favorite part of the White House. When asked about what she liked most about being First Lady of the United States, she answered that she enjoyed meeting the Pope and also spoke of being around Beyoncé and her fans at one of her concerts. She showed how excited she was by saying "Oh, my stars!" 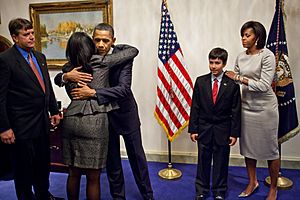 Obama with family of Christina Taylor in 2011.

Michelle Obama's brother, Craig Robinson, is the head coach of the Oregon State University men's basketball team. Her father, Fraser Robinson, was a pump operator for the Chicago Water Department. Her mother Marion Robinson stayed home to raise her and her brother Craig. Her children are Sasha and Malia Ann Obama.

These books were written or ghostwritten and published by Michelle Obama while she was First Lady and afterwards: 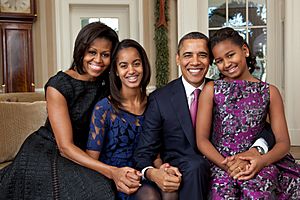 Official portrait by Pete Souza of the Obama family in the Oval Office, December 11, 2011. 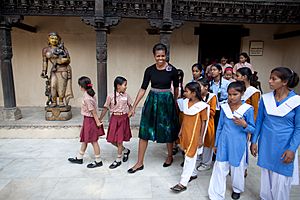 All content from Kiddle encyclopedia articles (including the article images and facts) can be freely used under Attribution-ShareAlike license, unless stated otherwise. Cite this article:
Michelle Obama Facts for Kids. Kiddle Encyclopedia.