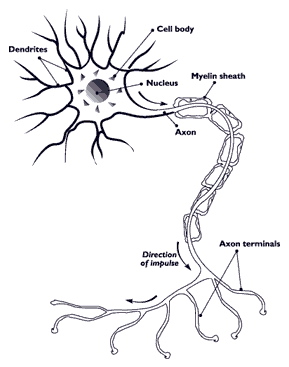 A healthy neuron with myelin sheath around the long, thin axon.

Multiple sclerosis (MS) is a serious health condition that gets worse over time. In this disease, the body’s natural guard against illness (the immune system) damages fatty coverings called myelin sheaths around the axons of cells called neurons in the central nervous system. The disease makes people’s bodies, eyesight, speech, and minds work poorly. People with MS do not normally live as long as healthy people.

In healthy people, myelin sheaths help neurons work. Electric signals in neurons move quickly through long, narrow axons like electricity in a wire. The myelin is like the insulator around the wire that keeps the signal strong by keeping it from moving out of the wire before the end. A person with MS has myelin that is too thin or completely gone. Without the protective covering, the signals between neurons do not travel well. Because of this, the mind and body cannot work like they normally do.

Scientists and doctors do not know for certain the cause of MS, but they think some things put some people at a higher risk for MS:

Research about the causes of MS is still incomplete. Some scientists think that a relatively unknown pathogen called Chlamydia pneumoniae may cause MS. Also, some viruses can cause myelin damage, there are other viruses that have been shown to make people more likely to get MS. Even though scientists and doctors have theories, no one has found one cause that explains every case of the disease.

All content from Kiddle encyclopedia articles (including the article images and facts) can be freely used under Attribution-ShareAlike license, unless stated otherwise. Cite this article:
Multiple sclerosis Facts for Kids. Kiddle Encyclopedia.