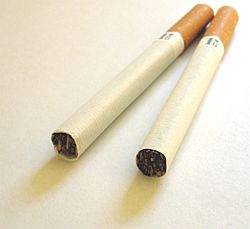 Cigarettes can be any dried leaf that people roll in thin paper to smoke, but the word is most often used to refer ones with dried tobacco leaves.

The nicotine in the tobacco can be addictive to people. The nicotine from cigarettes makes people want to smoke more, even if they do not like the taste or its other effects. The smoke also has other things that are bad for people's health.

Many countries have laws on who can smoke cigarettes and where they can smoke them.

They can cause lung cancer, heart disease and many other diseases.

Most packs of cigarettes have warning labels on them.

Today, all of the major tobacco companies admit that cigarettes are harmful to health.

Smokers have symptoms such as frequent coughing, chest pain, and breathlessness. Doctors say that people should not smoke, as it can harm almost every organ in the body.

Cigarette smoke contains many harmful substances. Among them are nicotine, tar, carcinogens and carbon monoxide.

All content from Kiddle encyclopedia articles (including the article images and facts) can be freely used under Attribution-ShareAlike license, unless stated otherwise. Cite this article:
Cigarette Facts for Kids. Kiddle Encyclopedia.