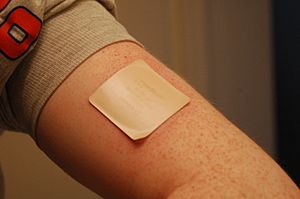 A 21 mg patch applied to the left arm. The Cochrane Collaboration finds that nicotine replacement therapy increases a quitter's chance of success by 50% to 70%.

Nicotine is a drug found in tobacco cigarettes, cigars, pipe tobacco, and chewing tobacco. Nicotine is an addictive stimulant that causes the heart to beat faster and makes blood pressure rise. It can also make a person feel less hungry and speeds up the metabolism. These effects can be very unhealthy. Many people who use tobacco products want to quit but have a hard time quitting. It is one of the most addictive chemicals that is widely consumed by humans.

Nicotine is a substance found in most members of the Nightshade family of plants. Small quantities of it can be found in tomatoes, potatoes, aubergines (eggplants) and green pepper (Capsicum, the peppers used as vegetables). Nicotine is also present in the Coca plant. In higher quantities it is a very efficient poison. It acts on the nerves. It is a stimulant in lower quantities. It is one of the main reasons people are addicted to smoking.

Nicotine is named after Jean Nicot. Nicot was an French ambassador in Portugal. He had some tobacco seeds sent to Paris for analysis (As a drug).

Besides the treatment of nicotine dependency, it seems that the drug can also be used to treat special (severe) forms of epilepsy, as well as some other diseases.

The amount of nicotine found in one cigarette varies greatly. Factors which influence the amount include type of tobacco; brand of cigarette; country or region (some markets restrict maximum average nicotine levels; and how the cigarette is smoked.

All content from Kiddle encyclopedia articles (including the article images and facts) can be freely used under Attribution-ShareAlike license, unless stated otherwise. Cite this article:
Nicotine Facts for Kids. Kiddle Encyclopedia.