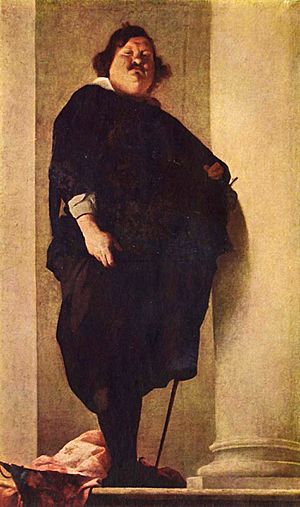 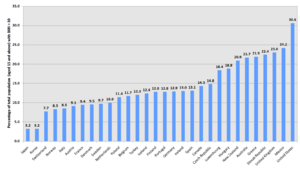 Percentage of the adult population with a BMI over 30, for the OECD countries

Obesity is the condition of being much too heavy for one's height so that one's health is affected. In other words, it means to be too overweight. Also known as being fat. It is considered a disease and has been described as an epidemic.

To know if a person is overweight, the body mass index (BMI) is calculated, by dividing the person's weight (in kilograms), by their height (in meters) squared (multiplied by itself). (This is only meaningful for adults who are fully grown, and should not be used for children. Growth charts can be used to measure obesity in children.)

A BMI between 20 and 25 is considered normal. People with a BMI of 25 or more are said to be overweight; with 30 and above, they are considered obese, and with 35 and above, they are considered severely obese (this used to be called morbidly obese). In general, the BMI number is a good quantifiable measurement of a person's obesity. However, it is a poor predictor in people who are very athletic, because a person with a higher than average amount of muscle tissue will weigh more than an average person, thus resulting in a BMI that is higher than normal, even if that person is very large.

The most common cause for obesity is getting more calories than are used by the body. Other factors that often contribute to obesity are:

Genetics are known to contribute to obesity. Leptin is a hormone that is linked to obesity.

An obese woman is more likely to have an unhealthy baby.

Risk is associated with where the excess fat is stored on the body. Abdominal obesity is particularly dangerous.

Some people think that the idea that obesity causes bad health is not completely true and has been exaggerated. An example is J. Eric Oliver. He wrote a book called Fat Politics: The Real Story Behind America's Obesity Epidemic. There is evidence for this belief. The Centers for Disease Control and Prevention said in 2003 that 400,000 people died because of being obese in 2000. Then in 2004 they said that the number was wrong. A 2013 review of scientific papers found that Grade 1 obesity (BMI 30-34.9) is not associated with increased deaths. Grades 2 (BMI 35-39.9) and 3 (40+) obesity are associated with much higher rates of death. It has been suggested that obesity is associated with mortality (death) because of mortality in Grade 2 and 3 obesity. People with grade 2 and 3 obesity are 29% more likely to die.

The 'obesity paradox' is a term used to describe how obesity can lower the risk of death. Obesity increases the chance of getting heart disease. But obese people with heart disease are less likely to die in a 7 year period. The obesity paradox has also been found in patients with stroke, diabetes, and chronic obstructive pulmonary disease.

Scientists have not yet found a 'cure' for obesity that most people are willing to implement. It is common wisdom that people who lose weight will regain it all within 5 years. However, this position has been scientifically challenged for over a decade. Additionally, modern research has achieved significantly higher success rates than the figure that dominates the popular internet. Therefore, diet and exercise is the most common recommended treatment for obesity - it has the potential for a very high treatment success rate.

Surgery can be used to treat obesity. Gastric bypass is the most common weight loss surgery. It makes a person's stomach smaller so that they feel full after eating less food and causes their body to absorb less calories. People who have surgery are usually very obese.

Some people think that obesity should not be treated at all. This position is contradicted by substantial medical research. Weight loss medicines can make people want to eat less or make less of the energy from food be absorbed by their bodies. The only weight loss drug approved by the FDA for long term use is orlistat. The U.S. Food and Drug Administration has not approved other drugs because they have side effects. Also they are worried that people who are not obese will take them.

In the West, people associate obesity with negative characteristics such as laziness, ugliness, stupidity, etc. These attitudes are increasing. Discriminating against someone because of their weight is legal in the United States. The fat acceptance movement says that this is wrong and is a kind of prejudice called fatphobia. In some cultures obesity is viewed as positive. It is associated with wealth, beauty, and fertility. Westernization means that non-Western cultures are becoming more 'fatphobic' like the West.

All content from Kiddle encyclopedia articles (including the article images and facts) can be freely used under Attribution-ShareAlike license, unless stated otherwise. Cite this article:
Obesity Facts for Kids. Kiddle Encyclopedia.