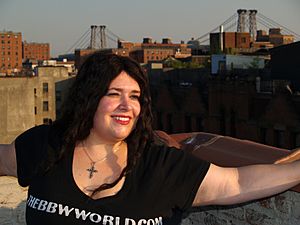 The term fat acceptance movement refers to social movements seeking to change social attitudes regarding being overweight. The movement has a political and culture related background, and its activities include although are not limited to sports, shopping and fashion matters. This movement argues that those who are overweight are targets of being discriminated against, threatened by hatred and subjected to major prejudice. There have been many debates within this movement.

All content from Kiddle encyclopedia articles (including the article images and facts) can be freely used under Attribution-ShareAlike license, unless stated otherwise. Cite this article:
Fat acceptance movement Facts for Kids. Kiddle Encyclopedia.