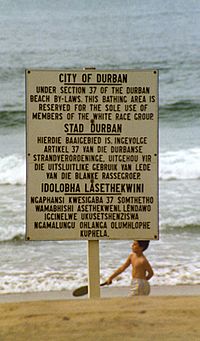 This beach in South Africa was only for White people. Photo taken in 1989

A person might be discriminated against because of their race, age, sex, politics, gender identity, religion, the way they look, a past criminal record, the person's lifestyle, their choice of clothing, their age or their disabilities whether they are a member of or fit in with a social clique (group), social class, social status or caste, and many other reasons.

Discrimination against can take many forms. It can include being fired from a job, not being able to be hired for a job, being paid less money than others at the same job, being refused a home or apartment, teasing, harassment, or simply being treated differently than other people. Laws known as "equal opportunity legisation" protect people from discrimination. They say people should be employed whatever their race, age, sex or religion. There should be reasonable care for people with disabilities or accessibility. Two people in the same position must be paid the same wage if they have do exactly the same job.

All content from Kiddle encyclopedia articles (including the article images and facts) can be freely used under Attribution-ShareAlike license, unless stated otherwise. Cite this article:
Discrimination Facts for Kids. Kiddle Encyclopedia.