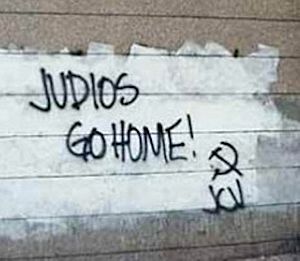 Antisemitic graffiti in Venezuela, alongside a hammer and sickle

Antisemitism is the hatred of or prejudice against Jews. Antisemitism has a long history, but the most well known act of anti-semitism is the Holocaust, also known as the Final Solution, a genocide which happened between 1933 and 1945. The plan was to totally get rid of the Jewish people in Europe, and up to 60-75% of them were killed. Around six million European Jews were killed because of the Nazi leader Adolf Hitler. He said that Jews were a racial group with naturally bad features.

Anti-Semitism in the Bible

The New Testament has anti-Semitic contents.

For you, brothers and sisters, became imitators of God’s churches in Judea, which are in Christ Jesus: You suffered from your own people the same things those churches suffered from the Jews who killed the Lord Jesus and the prophets and also drove us out. They displease God and are hostile to everyone in their effort to keep us from speaking to the Gentiles so that they may be saved. In this way they always heap up their sins to the limit. The wrath of God has come upon them at last.

All content from Kiddle encyclopedia articles (including the article images and facts) can be freely used under Attribution-ShareAlike license, unless stated otherwise. Cite this article:
Antisemitism Facts for Kids. Kiddle Encyclopedia.