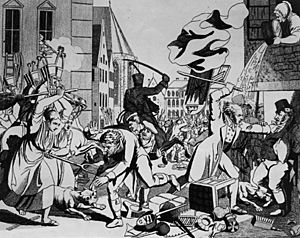 The Hep-Hep riots in Frankfurt, 1819. On the left, two peasant women are assaulting a Jewish man with pitchfork and broom. On the right, a man wearing spectacles, tails and a six-button waistcoat, "perhaps a pharmacist or a schoolteacher," holds another Jewish man by the throat and is about to club him with a truncheon. The houses are being looted. A contemporary engraving by Johann Michael Voltz. 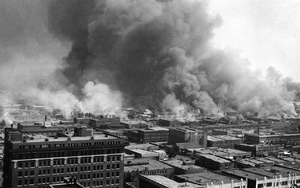 The 1921 Tulsa race riot, which destroyed the wealthiest black community in the United States, has been described as a pogrom.

Pogrom (from Russian:погром (pogrom); from "громить" IPA:- to wreak havoc, to demolish violently) is a form of riot because of antisemitism. This riot is directed against a group of people. These groups may be certain ethnic groups, they may belong to a certain religion, or they may have other marks of distinction. In a pogrom their homes, businesses, and places of worship are destroyed.

All content from Kiddle encyclopedia articles (including the article images and facts) can be freely used under Attribution-ShareAlike license, unless stated otherwise. Cite this article:
Pogrom Facts for Kids. Kiddle Encyclopedia.