Kristallnacht or the Night of Broken Glass, also called the November Pogrom(s), was a pogrom against Jews carried out by SA paramilitary forces and civilians throughout Nazi Germany on 9–10 November 1938. The German authorities looked on without intervening. The name Kristallnacht ("Crystal Night") comes from the shards of broken glass that littered the streets after the windows of Jewish-owned stores, buildings and synagogues were smashed.

Jewish homes, hospitals and schools were ransacked as the attackers demolished buildings with sledgehammers. The rioters destroyed 267 synagogues throughout Germany, Austria and the Sudetenland. Over 7,000 Jewish businesses were damaged or destroyed, and 30,000 Jewish men were arrested and incarcerated in concentration camps.

British historian Martin Gilbert wrote that no event in the history of German Jews between 1933 and 1945 was so widely reported as it was happening, and the accounts from foreign journalists working in Germany sent shockwaves around the world.

Herschel Grynszpan, a 17-year-old Jew living in Paris, learned that his whole family had been made to go back to Zsbaszyn in Poland, even though the younger children had been born in Germany. He got a gun, and with this he fired shots at Ernst Eduard vom Rath, who was a dimplomat of the German embassy in Paris. This was on 7 November. Vom Rath died of his wounds on 9 November.

The motive of Grynszpan is unclear. In a judicial hearing in 1942, he said it was revenge. He meant to shoot the ambassador, but hit Ernst Eduard vom Rath instead.

The reason given for the attacks was this assassination of the Nazi German diplomat Ernst vom Rath by Herschel Grynszpan. Estimates of fatalities caused by the attacks have varied. Early reports estimated that 91 Jews had been murdered. 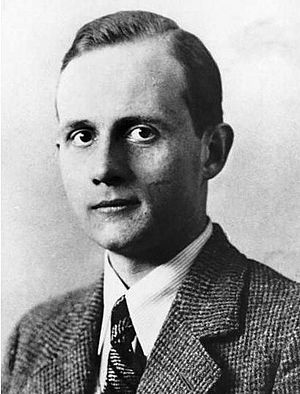 Nazi authorities turned a blind eye as SA storm troopers and civilians destroyed storefronts with hammers, leaving the streets covered in pieces of smashed windows. Historians view Kristallnacht as the event which began the Final Solution and the murder of six million Jews during the Holocaust.

The number of emigrating Jews surged, as those who were able left the country. In the ten months following Kristallnacht, more than 115,000 Jews emigrated from the Reich. The majority went to other European countries, the US and Palestine, and at least 14,000 made it to Shanghai, China.

As part of government policy, the Nazis seized houses, shops, and other property they had left behind. Many of the destroyed remains of Jewish property plundered during Kristallnacht were dumped near Brandenburg.

In October 2008, this dumpsite was discovered by Yaron Svoray, an investigative journalist. The site, the size of four Association football fields, contained an extensive array of personal and ceremonial items looted during the riots against Jewish property and places of worship on the night of 9 November 1938.

All content from Kiddle encyclopedia articles (including the article images and facts) can be freely used under Attribution-ShareAlike license, unless stated otherwise. Cite this article:
Kristallnacht Facts for Kids. Kiddle Encyclopedia.