The Free City of Danzig (German: Freie Stadt Danzig; Polish: Wolne Miasto Gdańsk) was a self-governing port on the Baltic Sea port and a city-state. It was set up on January 10, 1920, by Part III Section XI of the Treaty of Versailles of 1919, and put under League of Nations protection, with special rights reserved to Poland, because it was the only port in the Polish Corridor.

The Free City was represented abroad by Poland's ambassadors. The railway line that connected the Free City with Poland was administered by Poland. Similarly, the separated military post within the city's harbour, the Westerplatte (formerly a city beach), was also given to Poland. There were also two post-offices, one for the Danzig Postal Service, the other was Polish-run. 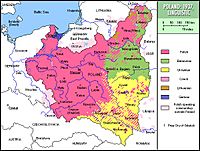 The Treaty of Versailles, split Danzig from Germany. The treaty made the people living in the city citizens of the Free City. German inhabitants lost their German nationality, if they wanted to stay German they had to go and live outside the Free City's territory.

Heads of State of the Free City of Danzig

In May 1933, the Nazi Party won the local elections in the city. But they had less than the two-thirds majority that would let them change the Constitution of the Free City of Danzig. The government introduced anti-Semitic and also anti-Catholic laws against the Poles and Kashubian inhabitants.

Poland always refused to allow the status of Danzig to change. In April 1939 the Polish Commissioner-General said that Poland was willing to fight if there was a change..

The Nazi government voted for re-unification with Germany on September 2, 1939, the day after the German invasion of Poland began.

Around 90% of the city was reduced to ruins towards the end of the Second World War. On March 30, 1945 the city was taken by the USSR. It is thought that more than 90% of the pre-war population were either dead or had fled by 1945.

The Allied Powers were told at the Potsdam conference that the former Free State was now part of Poland. (The Yalta conference was unclear whether the Free City would be recreated or not).

All content from Kiddle encyclopedia articles (including the article images and facts) can be freely used under Attribution-ShareAlike license, unless stated otherwise. Cite this article:
Free City of Danzig Facts for Kids. Kiddle Encyclopedia.