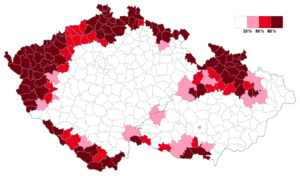 The native German-speaking regions in 1930, within the borders of the current Czech Republic, which in the interwar period were referred to as the Sudetenland

The context of German-speaking Europe circa 1937

The Sudetenland is the historical German name for the northern, southern, and western areas of former Czechoslovakia which were inhabited primarily by Sudeten Germans. These German speakers had predominated in the border districts of Bohemia, Moravia, and Czech Silesia from the time of the Austrian Empire.

The word "Sudetenland" did not come into being until the early part of the 20th century and did not come to prominence until almost two decades into the century, after the First World War, when Austria-Hungary was dismembered and the Sudeten Germans found themselves living in the new country of Czechoslovakia. The Sudeten crisis of 1938 was provoked by the Pan-Germanist demands of Germany that the Sudetenland be annexed to Germany, which happened after the later Munich Agreement. Part of the borderland was invaded and annexed by Poland. Afterwards, the formerly unrecognized Sudetenland became an administrative division of Germany. When Czechoslovakia was reconstituted after the Second World War, the Sudeten Germans were expelled and the region today is inhabited almost exclusively by Czech speakers.

The word Sudetenland is a German compound of Land, meaning "country", and Sudeten, the name of the Sudeten Mountains, which run along the northern Czech border and Lower Silesia (now in Poland). The Sudetenland encompassed areas well beyond those mountains, however.

Parts of the now Czech regions of Karlovy Vary, Liberec, Olomouc, Moravia-Silesia, and Ústí nad Labem are within the area called Sudetenland.

All content from Kiddle encyclopedia articles (including the article images and facts) can be freely used under Attribution-ShareAlike license, unless stated otherwise. Cite this article:
Sudetenland Facts for Kids. Kiddle Encyclopedia.