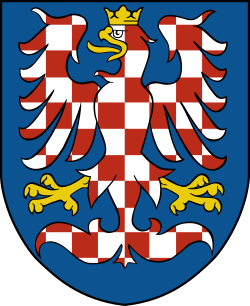 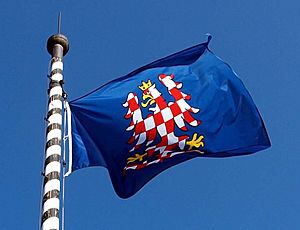 Moravia in relation to the current regions of the Czech Republic

Moravia (Czech and Slovak: Morava; German: Mähren) is a historical region in the eastern part of the Czech Republic. It takes its name from the Morava River which flows from the north to the south of the land.

Together with Bohemia in the West and Silesia in the North, Moravia made historical-political region called Czech Lands. Today, Moravia, Bohemia and small part of Silesia make up the current Czech Republic. 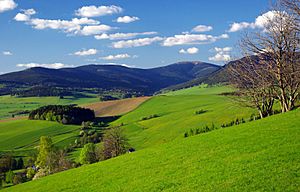 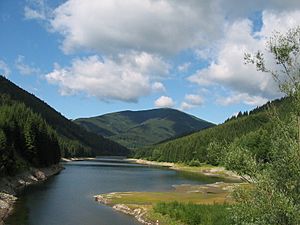 Šance, part of the Moravian-Silesian Beskids 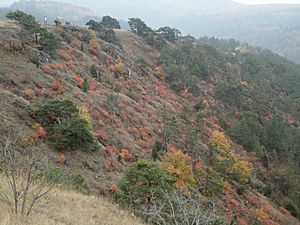 Moravia occupies most of the eastern part of the Czech Republic. Moravian territory is naturally strongly determined, in fact, as the Morava river basin, with strong effect of mountains in the west (de facto main European continental divide) and partly in the east, where all the rivers rise.

Moravia occupies an exceptional position in Central Europe. All the highlands in the west and east of this part of Europe run west-east, and therefore form a kind of filter, making north-south or south north movement more difficult. Only Moravia with the depression of the westernmost Subcarpathia, 14–40 kilometers (8.7–24.9 mi) wide, between the Bohemian Massif and the Outer Western Carpathians (gripping the meridian at a constant angle of 30°), provides a comfortable connection between the Danubian and Polish regions, and this area is thus of great importance in terms of the possible migration routes of large mammals – both as regards periodically recurring seasonal migrations triggered by climatic oscillations in the prehistory, when permanent settlement started.

Moravia borders Bohemia in the west, Lower Austria in the south(west), Slovakia in the southeast, Poland very shortly in the north, and Czech Silesia in the northeast. Its natural boundary is formed by the Sudetes mountains in the north, the Carpathians in the east and the Bohemian-Moravian Highlands in the west (the border runs from Králický Sněžník in the north, over Suchý vrch, across Upper Svratka Highlands and Javořice Highlands to tripoint nearby Slavonice in the south). The Thaya river meanders along the border with Austria and the tripoint of Moravia, Austria and Slovakia is at the confluence of the Thaya and Morava rivers. The northeast border with Silesia runs partly along the Moravice, Oder and Ostravice rivers. Between 1782–1850, Moravia (also thus known as Moravia-Silesia) also included a small portion of the former province of Silesia – the Austrian Silesia (when Frederick the Great annexed most of ancient Silesia (the land of upper and middle Oder river) to Prussia, Silesia's southernmost part remained with the Habsburgs).

Today Moravia including the South Moravian Region, the Zlín Region, vast majority of the Olomouc Region, southeastern half of the Vysočina Region and parts of the Moravian-Silesian, Pardubice and South Bohemian regions.

Geologically, Moravia covers a transitive area between the Bohemian Massif and the Carpathians (from (north)west to southeast), and between the Danube basin and the North European Plain (from south to northeast). Its core geomorphological features are three wide valleys, namely the Dyje-Svratka Valley (Dyjsko-svratecký úval), the Upper Morava Valley (Hornomoravský úval) and the Lower Morava Valley (Dolnomoravský úval). The first two form the westernmost part of the Subcarpathia, the last is the northernmost part of the Vienna Basin. The valleys surround the low range of Central Moravian Carpathians. The highest mountains of Moravia are situated on its northern border in Hrubý Jeseník, the highest peak is Praděd (1491 m). Second highest is the massive of Králický Sněžník (1424  m) the third are the Moravian-Silesian Beskids at the very east, with Smrk (1278 m), and then south from here Javorníky (1072). The White Carpathians along the southeastern border rise up to 970 m at Velká Javořina. The spacious, but moderate Bohemian-Moravian Highlands on the west reach 837 m at Javořice.

The fluvial system of Moravia is very cohesive, as the region border is similar to the watershed of the Morava river, and thus almost the entire area is drained exclusively by a single stream. Morava's far biggest tributaries are Thaya (Dyje) from the right (or west) and Bečva (east). Morava and Thaya meet at the southernmost and lowest (148 m) point of Moravia. Small peripheral parts of Moravia belong to the catchment area of Elbe, Váh and especially Oder (the northeast). The watershed line running along Moravia's border from west to north and east is part of the European Watershed. For centuries, there has been plans to build a waterway across Moravia to join the Danube and Oder river systems, using the natural route through the Moravian Gate.

An area in South Moravia, around Hodonín and Břeclav, is part of the Viennese Basin. Petroleum and lignite are found there in abundance. The main economic centres of Moravia are Brno, Olomouc and Zlín, plus Ostrava lying directly on the Moravian-Silesian border. As well as agriculture in general, Moravia is noted for its viticulture; it contains 94% of the Czech Republic's vineyards and is at the centre of the country's wine industry.

Aircraft production in the region started in 1930s and there are signs of recovery in recent years and the production is expected to grow from 2013 onwards.

Machinery has been the most important industrial sector in the region, especially in South Moravia, for many decades. The main centres of machinery production are Brno (Zbrojovka Brno, Zetor, První brněnská strojírna, Siemens), Blansko (ČKD Blansko, Metra), Adamov (ADAST), Kuřim (TOS Kuřim), Boskovice (Minerva, Novibra) and Břeclav (Otis Elevator Company), together with a large number of other variously sized machinery or machining factories, companies or workshops spread all over Moravia.

The beginnings of the electrical industry in Moravia date back to 1918. The biggest centres of electrical production are Brno (VUES, ZPA Brno, EM Brno), Drásov, Frenštát pod Radhoštěm and Mohelnice (currently Siemens). 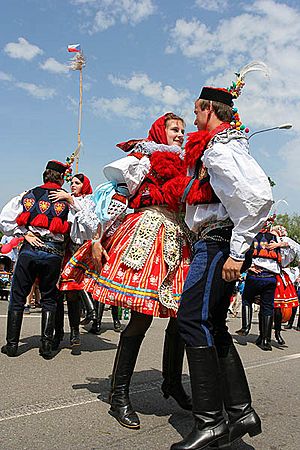 The Moravians are generally a Slavic ethnic group who speak various (generally more archaic) dialects of Czech. Before the expulsion of Germans from Moravia the Moravian German minority also referred to themselves as "Moravians" (Mährer). Those expelled and their descendants continue to identify as Moravian. Some Moravians assert that Moravian is a language distinct from Czech; however, their position is not widely supported by academics and the public. Some Moravians identify as an ethnically distinct group; the majority consider themselves to be ethnically Czech. In the census of 1991 (the first census in history in which respondents were allowed to claim Moravian nationality), 1,362,000 (13.2%) of the Czech population identified as being of Moravian nationality (or ethnicity). In some parts of Moravia (mostly in the centre and south), majority of the population identified as Moravians, rather than Czechs. In the census of 2001, the number of Moravians had decreased to 380,000 (3.7% of the country's population). In the census of 2011, this number rose to 522,474 (4.9% of the Czech population).

All content from Kiddle encyclopedia articles (including the article images and facts) can be freely used under Attribution-ShareAlike license, unless stated otherwise. Cite this article:
Moravia Facts for Kids. Kiddle Encyclopedia.