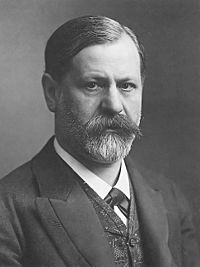 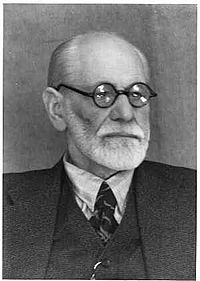 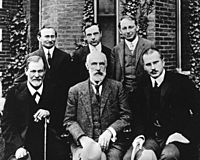 Sigmund Freud (Moravia, 6 May 1856 – London, 23 September 1939) was an Austrian neurologist (a person who treats the nervous system). He invented the treatment of mental illness and neurosis by means of psychoanalysis.

Freud is important in psychology because he studied the unconscious mind. The unconscious part of the mind cannot be easily controlled or noticed by a person.

In 1860 his family moved with their little boy to Vienna. He did well in school and became a doctor. Freud married Martha Bernays in 1886. They had six children.

Freud lived in Austria in the 1930s. After the Anschluss, Germany and Austria were combined. Because he was Jewish, he received a visit from the Gestapo. Freud and his family did not feel safe anymore. Freud left Vienna and went to England in June 1938.

All content from Kiddle encyclopedia articles (including the article images and facts) can be freely used under Attribution-ShareAlike license, unless stated otherwise. Cite this article:
Sigmund Freud Facts for Kids. Kiddle Encyclopedia.