Jean-Martin Charcot (29 November 1825 – 16 August 1893) was a French neurologist and professor of anatomical pathology. He is best known today for his work on hypnosis and hysteria. Also known as "the founder of modern neurology", his name has been associated with at least 15 medical names. He named and was the first to describe multiple sclerosis.

Charcot has been referred to as "the father of French neurology and one of the world's pioneers of neurology". His work greatly influenced the developing fields of neurology and psychology; modern psychiatry owes much to the work of Charcot and his direct followers. He was the "foremost neurologist of late nineteenth-century France" and has been called "the Napoleon of the neuroses". 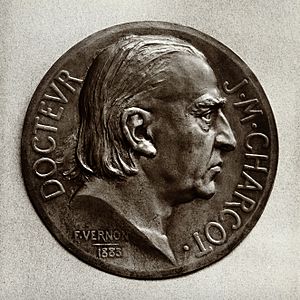 Born in Paris, Charcot worked and taught at the famous Salpêtrière Hospital for 33 years. His reputation as an instructor drew students from all over Europe. In 1882, he established a neurology clinic at Salpêtrière, which was the first of its kind in Europe. Charcot was a part of the French neurological tradition and studied under, and greatly revered, Duchenne de Boulogne.

Charcot thought of art as a crucial tool of the clinicoanatomic method. He used photos and drawings, many made by himself or his students, in his classes and conferences. He also drew outside the neurology domain, as a personal hobby. He is considered a key figure in the incorporation of photography to the study of neurological cases.

He married in 1862 and had two children, Jeanne and Jean-Baptiste, who later became a doctor and a famous polar explorer".

All content from Kiddle encyclopedia articles (including the article images and facts) can be freely used under Attribution-ShareAlike license, unless stated otherwise. Cite this article:
Jean-Martin Charcot Facts for Kids. Kiddle Encyclopedia.