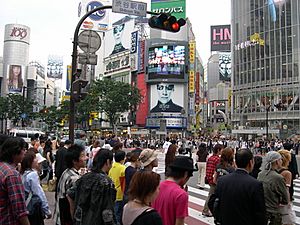 Social psychology studies the nature and causes of social behavior. 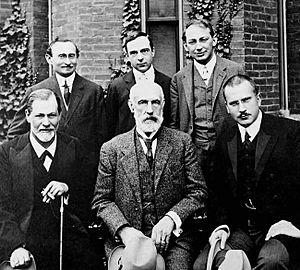 Psychology is the study of the mind and of thought, feeling, and behaviour. It is an academic and applied discipline which involves the scientific study of mental functions and behaviours.

Psychology deals mainly with humans but also sometimes with animals. Because psychology is difficult to study as a whole, psychologists often only look at small parts of it at one time. Psychology has much in common with many other fields, and overlaps with many of them. Some of these fields are medicine, ethology, computer science, and linguistics.

In this field, a professional practitioner or researcher is called a psychologist and is a social, behavioural, or cognitive scientist. Psychologists attempt to understand the role of mental functions in individual and social behavior. They also explore the physiological and neurobiological processes which underlie cognitive functions and behaviours.

Psychology has been split up into smaller parts called branches. These are subjects in psychology that try to answer a particular group of questions about how people think. Some branches of psychology that are often studied are:

Psychology is a type of science, and research psychologists use many of the same types of methods that researchers from other natural and social sciences use.

Psychologists make theories to try to explain a behavior or pattern they see. Based on their theory they make some predictions. They then carry out an experiment or collect other types of information that will tell them whether their predictions were right or wrong.

Some types of experiments cannot be done on people because the process would be too long, expensive, dangerous, unfair, or otherwise unethical. There are also other ways psychologists study the mind and behavior scientifically, and test their theories. Psychologists might wait for some events to happen on their own; they might look at patterns among existing groups of people in natural environments; or they might do experiments on animals (which can be simpler and more ethical to study).

Psychology shares other things with natural sciences, as well. For example, a good psychological theory may be possible to prove wrong. Just like in any natural science, a group of psychologists can never be completely sure that their theory is the right one. If a theory can be proved wrong, but experiments do not prove it wrong, then it is more likely that the theory is accurate. This is called falsifiability.

Psychologists use many tools as part of their daily work. Psychologists use surveys to ask people how they feel and what they think. They may use special devices to look at the brain and to see what it is doing. Psychologists use computers to collect data as they measure how people behave in response to pictures, words, symbols, or other stimuli. Psychologists also use statistics to help them analyze the data that they get from their experiments.

Not all psychology is scientific psychology. Psychodynamic psychology and depth psychology do things like interpreting people's dreams to understand the unconscious mind, as in older approaches to psychology begun by Carl Jung who was particularly interested in finding methods for measuring what kind of personality people have.

Humanistic psychology and existential psychology also believe that it is more important to understand personal meaning than to find causes and effects of mental processes and behaviours.

To become a psychologist, a person must first get a basic degree at a university and then go to graduate school. A Master's degree, either MSc (Master of Science) or MA (Master of Arts) allows beginning work, like a school psychologist. A doctorate degree takes a longer time because it includes doing research and writing a detailed report called a dissertation or thesis. The doctoral graduate uses the initials PhD or DPhil (Doctor of Philosophy) after his or her name. Some clinical psychologists earn a Doctor of Psychology degree and use the initials PsyD after their name. The American Psychological Association says that people need a PhD (or PsyD and a current state license in the U.S.) in order to call themselves a 'psychologist'.

The words psychologist and psychiatrist may be confused with each other. A psychiatrist has graduated from medical school and uses the initials MD or its equivalent (MB ChB in London University, for example). A psychiatrist or doctor may work with a psychologist: they may prescribe and check on the effect of medications.

All content from Kiddle encyclopedia articles (including the article images and facts) can be freely used under Attribution-ShareAlike license, unless stated otherwise. Cite this article:
Psychology Facts for Kids. Kiddle Encyclopedia.