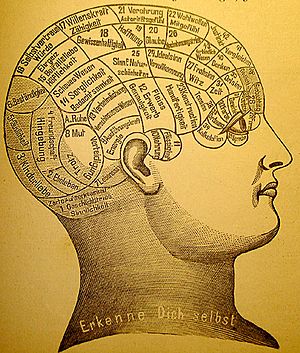 Many 18th c. treatments for psychological distress were based on pseudo-scientific ideas, such as Phrenology.

Clinical psychology is an integration of science, theory and clinical knowledge for the purpose of understanding, preventing, and relieving psychologically based distress or dysfunction and to promote subjective well-being and personal development. Psychotherapy uses talking instead of medical or physical treatments. In many countries, clinical psychology is a regulated mental health profession.

The earliest recorded approaches assess and treat mental distress were a combination of religious, magical and/or medical perspectives. In the early 19th century, one approach to study mental conditions and behavior was using the study of personality by examining the shape of the skull. Other popular treatments at that time included the study of the shape of the face and a treatment for mental conditions using magnets.

While the scientific community eventually came to reject all of these methods for treating mental illness, academic psychologists also were not concerned with serious forms of mental illness. The study of mental illness was already being done in the developing fields of psychiatry and neurology within the asylum movement. It was not until the end of the 19th century, around the time when Sigmund Freud was first developing his "talking cure" in Vienna, that the first scientific application of clinical psychology began.

Even as clinical psychology was growing, working with issues of serious mental distress remained the domain of psychiatrists and neurologists. However, clinical psychologists continued to make inroads into this area due to their increasing skill at psychological assessment.

Psychologists' reputation as assessment experts became solidified during World War I with the development of two intelligence tests. Due in large part to the success of these tests, assessment was to become the core discipline of clinical psychology for the next quarter century, when another war would propel the field into treatment. WWII helped bring dramatic changes to clinical psychology, not just in America but internationally as well.

Since the 1970s, clinical psychology has continued growing into a robust profession and academic field of study. Although the exact number of practicing clinical psychologists is unknown, it is estimated that between 1974 and 1990, the number in the U.S. grew from 20,000 to 63,000.

In clinical practice, clinical psychologists may work with individuals, couples, families, or groups in a variety of settings, including private practices, hospitals, mental health organizations, schools, businesses, and non-profit agencies.

The practice of clinical psychology requires a license in the United States, Canada, the United Kingdom, and many other countries. Although each of the U.S. states is somewhat different in terms of requirements and licenses, there are three common elements:

Sigmund Freud's ideas led to the development of psychodynamic psychotherapy. Its goal is to help the patient, or client, to understand the meaning of the unconscious desires and conflicts that have caused their problems.

All content from Kiddle encyclopedia articles (including the article images and facts) can be freely used under Attribution-ShareAlike license, unless stated otherwise. Cite this article:
Clinical psychology Facts for Kids. Kiddle Encyclopedia.