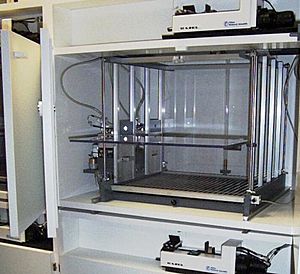 A skinner box, for a rat. Boxes such as these are often used

Behaviourism is an approach to study behaviour based only on what can be directly seen. Behaviorists focus on relationships between stimuli and responses.

Unseen qualities such as states of mind (any condition which is significantly different from a normal waking state e.g. as a result of fear or anxiety) were not used in this type of study even though we know that the mind plays a part in all advanced animals' behaviors. Behaviourism states that behaviour can be studied without knowing what the physiology of an event is, and without using theories such as that of the mind. By definition, all behaviour can be observed.

Behaviorism also relied on another idea, that all human behaviour was learned. Behaviorists believed that behavior could be explained by classical or operant conditioning. This is learning as a result of influences from past experiences. However, behaviourists denied the importance of inherited behaviours, instincts (inherent inclination of a living organism), or inherited tendency to behave. They did not believe, or ignored, the idea of heredity(passing of traits to offspring from parents), that something can come from a person's genes. This was the idea of the blank slate, that babies are born with a clean, empty mind. Humans, when born, are thought not to have mental experience or knowledge, and that everything is learned after they grow. The blank slate premise is opposed by modern evolutionary psychology.

Pavlov researched classical conditioning through the use of dogs and their natural ability to salivate, produce water in their mouths. Thorndike and Watson rejected looking at one's own conscious thoughts and feelings ("Introspection"). They wanted to restrict psychology to experimental methods. Skinner's research leant mainly on behaviour shaping using positive reinforcement (rewards rather than punishments).

As a scientific theory, behaviourism has largely been replaced by cognitive psychology.

The act of conditioning is when a desired behavior is made through training. This is done by pairing stimuli with a specific behavior. Some behaviors are natural reflexes which people (and animals) are born with. Infants are born with inherited reflexes that help them eat, communicate, and survive. These reflexes are unconditioned, they are not taught to the baby.

Classical conditioning (also known as Pavlovian conditioning) is when a conditioned stimulus causes an unconditioned response. This explains how people gained new responses to different stimuli.

Another example of an unconditioned response is when wind is blown in a person's eyes and they blink automatically to prevent dust or something from getting into them. This is a reflex that is innate.

Fear conditioning is when a previously neutral stimulus is used to elicit fear. One main example is the Little Albert experiment by Watson and Rayner. The researchers tested infants' emotional reactions. They found that Little Albert would react to a loud noise and then consequently conditioned that noise to elicit fear when he saw a white rat. This came to be known as 'conditioned emotional response'. After a period of time, Little Albert would cry when he saw a white rat or anything small and white, even his stuffed animal.

Operant conditioning is also known as instrumental conditioning. It was studied by Thorndike and Skinner.

All content from Kiddle encyclopedia articles (including the article images and facts) can be freely used under Attribution-ShareAlike license, unless stated otherwise. Cite this article:
Behaviorism Facts for Kids. Kiddle Encyclopedia.