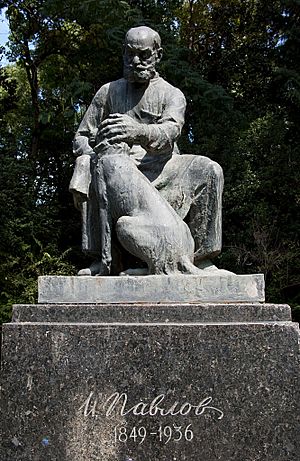 A statue of Ivan Pavlov and one of his dogs

Classical conditioning (also Pavlovian conditioning) is a form of associative learning. Ivan Pavlov was the first to show in what way it works. He did this in 1927, using dogs. There is one stimulus which is called neutral, and there is another, which has some meaning. If the two stimuli are often presented together, the organism learns that they belong together. As a result, it is enough to show the neutral stimulus to get what Pavlov referred this learned relationships to as a conditional reflex, or to what is today called a conditioned reflex or response.

Pavlov did the experiment with dogs. Each time before he fed the dogs, he rang a bell. The dogs then learned that when the bell rang they would be fed. So they started to salivate, when they heard the bell ring, even before they saw or smelled the food. 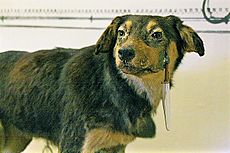 One of Pavlov's dogs, with a saliva capture tube

According to Pavlov, conditioning does not involve the acquisition of any new behavior, but rather the tendency to respond in old ways to new stimuli.

Some therapies associated with classical conditioning are aversion therapy, systematic desensitization and flooding.

Aversion therapy is a type of behavior therapy designed to make patients cease an undesirable habit by associating the habit with a strong unpleasant unconditioned stimulus. For example, a medication might be used to associate the taste of alcohol with stomach upset.

Systematic desensitization is a treatment for phobias in which the patient is trained to relax while being exposed to progressively more anxiety-provoking stimuli (e.g. angry words). This is an example of counter-conditioning, intended to associate the feared stimuli with a response (relaxation) that is incompatible with anxiety

Flooding is a form of desensitization that attempts to eliminate phobias and anxieties by repeated exposure to highly distressing stimuli until the lack of reinforcement of the anxiety response causes its extinction. "Flooding" usually involves actual exposure to the stimuli, whereas the term "implosion" refers to imagined exposure, but the two terms are sometimes used synonymously.

Signals that consistently precede food intake can become conditioned stimuli for a set of bodily responses that prepares the body for food and digestion. These reflexive responses include the secretion of digestive juices into the stomach and the secretion of certain hormones into the blood stream, and they induce a state of hunger. An example of conditioned hunger is the "appetizer effect." Any signal that consistently precedes a meal, such as a clock indicating that it is time for dinner, can cause people to feel hungrier than before the signal.

In the 1932 novel Brave New World by Aldous Huxley, conditioning plays a key role in the maintenance of social peace, especially in maintaining the caste system upon which society is based. Another example is in Anthony Burgess' 1962 dystopian novel A Clockwork Orange in which the novel's anti-hero and protagonist, Alex, undergoes a procedure called the Ludovico technique, where he is fed a solution to cause severe nausea and then forced to watch violent acts. This renders him unable to perform any violent acts without inducing similar nausea.

All content from Kiddle encyclopedia articles (including the article images and facts) can be freely used under Attribution-ShareAlike license, unless stated otherwise. Cite this article:
Classical conditioning Facts for Kids. Kiddle Encyclopedia.