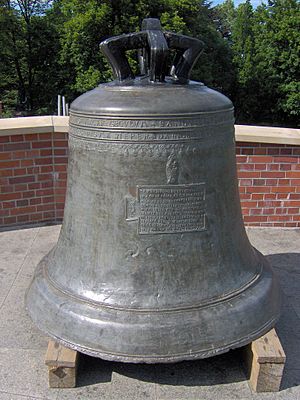 A bell is a simple musical instrument. Most bells are made of metal. Bells are also in churches to announce the time between hours. Ships usually carry a ship's bell. Alarm bells warn of danger. Some bells are in bell towers.

All content from Kiddle encyclopedia articles (including the article images and facts) can be freely used under Attribution-ShareAlike license, unless stated otherwise. Cite this article:
Bell Facts for Kids. Kiddle Encyclopedia.