The Shang dynasty (Chinese: 商朝; pinyin: Shāngcháo), also historically known as the Yin dynasty (Chinese: 殷代; pinyin: Yīndài), was a Chinese dynasty that ruled in the Lower Yellow River Valley in the second millennium BC, succeeding the semi-mythical Xia dynasty and followed by the Zhou dynasty. The classic account of the Shang comes from texts such as the Book of Documents, Bamboo Annals and Records of the Grand Historian.

The Shang ruled from 1766 to 1122 BC, but according to the chronology based upon the "current text" of Bamboo Annals, they ruled from 1556 to 1046 BC. The state-sponsored Xia–Shang–Zhou Chronology Project dated them from c. 1600 to 1046 BC based on the carbon 14 dates of the Erligang site.

The Shang dynasty is the earliest dynasty of traditional Chinese history firmly supported by archaeological evidence. Excavation at the Ruins of Yin (near modern-day Anyang), which has been identified as the last Shang capital, uncovered eleven major royal tombs and the foundations of palaces and ritual sites, containing weapons of war and remains from both animal and human sacrifices. Tens of thousands of bronze, jade, stone, bone, and ceramic artifacts have been found.

The Anyang site has yielded the earliest known body of Chinese writing, mostly divinations inscribed on oracle bones – turtle shells, ox scapulae, or other bones. More than 20,000 were discovered in the initial scientific excavations during the 1920s and 1930s, and over four times as many have been found since. The inscriptions provide critical insight into many topics from the politics, economy, and religious practices to the art and medicine of this early stage of Chinese civilization. 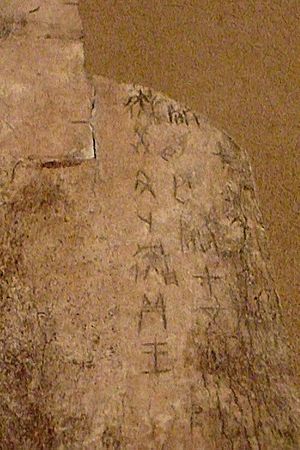 This is an oracle bone. As you can see, it is not actually a bone, it is a rock with important Chinese language carved on it.

Shang Zhou, the last king, killed himself after his army was defeated by the Zhou people. Legends say that his army betrayed him by joining the Zhou rebels in a decisive battle.

All content from Kiddle encyclopedia articles (including the article images and facts) can be freely used under Attribution-ShareAlike license, unless stated otherwise. Cite this article:
Shang Dynasty Facts for Kids. Kiddle Encyclopedia.