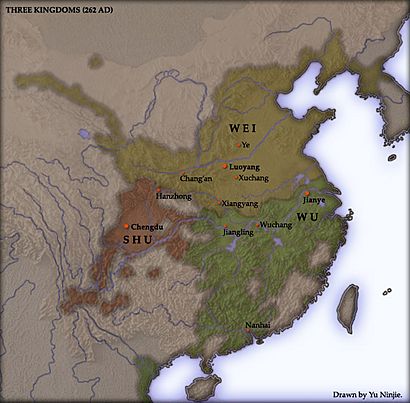 Three Kingdoms is the name of a historical period in Ancient China. This period lasted from about 180 or 220, to about 280. During this period, China was split between the kingdoms of Wei, Shu Han and Wu. After the fall of the Han dynasty, there were three important successors. However, none of the three was strong enough to win against the two others. During the Han dynasty, China had an emperor. After the end of the Han dynasty, three kingdoms were left. Chinese historians were unable to decide if there was a legitimate sucessor to the last Han emperor. The last Han emperor Xian left power in 220, and handed it to Xao Pi. Jin Wudi was able to unite China again in 280. Between the two years was the period of the three kingdoms.

In the year 189, the central government lost most of its power. For this point on, it was unable to do much. For this reason, many people think that the time of the Three Kingdoms already started in 189.

All content from Kiddle encyclopedia articles (including the article images and facts) can be freely used under Attribution-ShareAlike license, unless stated otherwise. Cite this article:
Three Kingdoms Facts for Kids. Kiddle Encyclopedia.