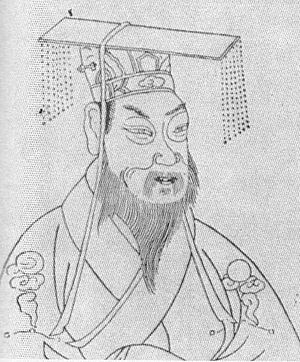 His brother Sun Ce conquered Southeastern China from 197 until his death in 200. Sun Quan was in charge at the age of 18. He continued to expand his empire and drew back the forces of Cao Cao in the Battle at Red Cliffs (along with Liu Bei). To have better opportunities against the north, he gave his Jing Province to Liu Bei so that he could create an empire on his own. Liu Bei conquered the other western territories from 211 to 214 and set his brother Guan Yu in charge of defending Jing.

Now that Liu Bei had his own empire, Sun quan demanded his western province back from him, but Liu Bei declined. In alliance with Cao Cao, Sun Quan's general Lü Meng captured Guan Yu in 219 and slayed him along with his son, Guan Ping.

After Cao Cao's son Cao Pi started the Wei Dynasty in 220, Liu Bei also wanted to be an emperor and declared himself Emperor of Shu Han in 221. He considered himself the righteous heir of the abdicated Han emperor Xian. Sun Quan declared himself King of Wu in 222. Liu Bei found that offensive, and launched a great attack against Sun Quan but failed—due to Lu Xun's great tactics. He died a year later.

Under the regency of the Shu prime minister Zhuge Liang, the alliance between Shu and Wu was renewed. Both empires did not have to worry about their defense in the west/east after that.

In 229, Sun Quan declared himself Emperor of Wu. His attacks on Wei were all in vain but he managed to develop his country very well. After his son Crown Prince Sun Deng died in 241, he made his now-oldest son Sun He Crown Prince. All along the next nine years, He would have trouble with his brother Sun Ba who wanted to be Crown Prince instead. Their fight even caused the honorable general Lu Xun to die of anger in 245.

In 250, Sun Quan was sick of his sons' struggles and deposed them both as princes. Instead he made his youngest son Sun Liang Crown Prince. Two years later, Sun Quan died at the age of 70. For his follower was too young to rule on his own, the official Zhuge Ke became regent.

All content from Kiddle encyclopedia articles (including the article images and facts) can be freely used under Attribution-ShareAlike license, unless stated otherwise. Cite this article:
Sun Quan Facts for Kids. Kiddle Encyclopedia.