This article is about the military strategist Sun Tzu. For the mathematician of the same name, see Sun Tzu (mathematician). 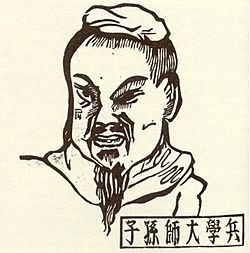 Sun Tzu (544 BC – 496 BC) also called Sun Wu, was an ancient Chinese general, military expert and philosopher. He is widely believed to have been the author of the most important work of military strategy and theory, The Art of War. His name means 'Master Sun'. His family name is Sun, Tzu is an honorific (title of respect) meaning 'master'.

Most of what we know about Sun Tzu comes from Ssu-ma Ch'ien's Shih chi, also called the Records of the Grand Historian. According to the Grand Historian, Sun Tzu lived during the period called 'The Spring and Autumn Period of China'. This era dates from 770 BC to 476 BC.

Sun Tzu was born in the State of Qi (modern Shandong province). This is according to the Records of the Grand Historian. However, the Spring and Autumn Annals of Wu and Yueh claim he was born in Wu. Sun Tzu lived during the turbulent period of the late Chou dynasty. His grew up in a military family and he studied military science. Not much is known about his childhood or early life. It is known that at some point in his life he became known as a great general and a military strategist. He became a general for King Helü of Wu.

Sun Tzu won battles by not actually fighting his enemy when it wasn't necessary. He recommended spies, deception and a commander having complete control of his soldiers. When he did fight, he understood warfare better than most of his opponents. Sun Tzu learned to win battles with the least loss of his own men.

Many historians believe he was the victor at the Battle of Boju in 506 BC. The great historian Sima Qian (145/135–86 BC), author of Shiji (Historical Record), called Sun Tzu an exceptional strategic battlefield commander. He also said Sun Tzu was both flexible and had unlimited surprises for his enemies. Sima Qian wrote that in his nearly 40-years as a general, Sun Tzu never lost a battle, a campaign or a war.

The Art of War

The Art of War was one of the earliest books on Chinese warfare. It remains one of the best known and most influential books ever written. The book was widely copied in the ancient world. An early copy was discovered in 1972. It was written on bamboo slats that were sewn together. It became known in the western world during the late 18th century. It wasn't translated into English until the 20th century.

At that time the rules for warfare were based on chivalry. War was the sport of rich noblemen. Sun Tzu refused to see war as a sport. He used Taoist principles and applied them to warfare. In doing this he changed the rules of war. Unlike generals who enjoyed long campaigns, he understood war was was serious. Sun Tzu believed that once a war started, the goal was to defeat the enemy. Sun Tzu was unconventional in that he didn't follow the prevailing wisdom of his time. Other generals were simply unprepared for Sun Tzu's tactics.

For at least the last two thousand years, Sun Tzu has had a tremendous influence on military thinking. The Art of War is credited by Mao Zedong as having helped him defeat Chiang Kai-Shek in the Chinese Civil War. Ho Chi Minh was a fan of Sun Tzu. He led the Communist Vietnamese in their fight against American-backed South Vietnam. American generals Norman Schwarzkopf, Jr. and Colin Powell followed principals in the Art of War in the Gulf War.

All content from Kiddle encyclopedia articles (including the article images and facts) can be freely used under Attribution-ShareAlike license, unless stated otherwise. Cite this article:
Sun Tzu Facts for Kids. Kiddle Encyclopedia.