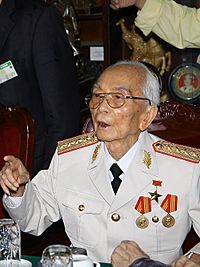 Võ Nguyên Giáp (25 August 1911 – 4 October 2013) was a general in the Vietnam People's Army and a politician. He fought during World War II, where he served as the military leader of the Viet Minh resistance against the Japanese occupation of Vietnam.

Võ Nguyên Giáp was also a teacher and a journalist, an interior minister in President Hồ Chí Minh's Việt Minh government, the military commander of the Viet Minh, the commander of the People's Army of Vietnam (PAVN), and defense minister. He also served as a member of the Politburo of the Vietnam Workers' Party, which in 1976 became the Communist Party of Vietnam.

On 4 October 2013 Võ Nguyên Giáp died in Hanoi Vietnam at the age of 102.. He was given a state funeral on 12 and 13 October 2013 and his body lay in state at the national morgue in Hanoi until his burial at the Vũng Chùa - Đảo Yến in his home province of Quảng Bình

All content from Kiddle encyclopedia articles (including the article images and facts) can be freely used under Attribution-ShareAlike license, unless stated otherwise. Cite this article:
Võ Nguyên Giáp Facts for Kids. Kiddle Encyclopedia.