The Khmer Rouge was the name popularly given to the followers of the Communist Party of Kampuchea (CPK) and by extension to the regime through which the CPK ruled in Cambodia between 1975 and 1979. The name had originally been used in the 1950s by Norodom Sihanouk.

The Khmer Rouge army was slowly built up in the jungles of Eastern Cambodia during the late 1960s, supported by the North Vietnamese army, the Viet Cong and the Pathet Lao. Despite a massive American bombing campaign against them, the Khmer Rouge won the Cambodian Civil War when in 1975 they captured the Cambodian capital and overthrew the government of the Khmer Republic. 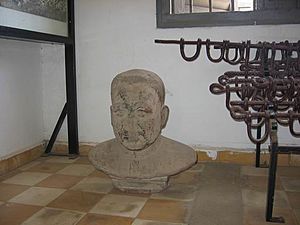 Following their victory, the Khmer Rouge led by Pol Pot, Nuon Chea, Ieng Sary, Son Sen and Khieu Samphan renamed the country as Democratic Kampuchea and immediately set about forcibly evacuating the country's major cities. The regime murdered hundreds of thousands of their perceived political opponents. Ultimately, the Cambodian genocide led to the deaths of 1.5 to 3 million people, around 25% of Cambodia's population.

The Khmer Rouge regime was highly repressive. The genocide was in part the result of the regime's social engineering policies. Its attempts at agricultural reform led to widespread famine while its insistence on absolute self-sufficiency, even in the supply of medicine, led to the death of many thousands from treatable diseases such as malaria. 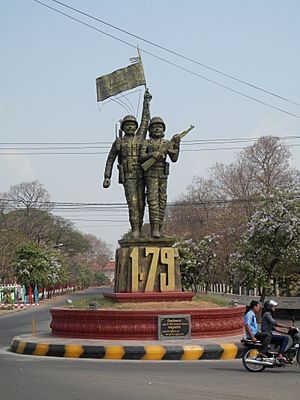 Statue Celebrating the Overthrow of the Khmer Rouge by Vietnam

The regime was removed from power in 1979 when Vietnam entered Cambodia and quickly destroyed most of the Khmer Rouge's forces.

The Khmer Rouge then fled to Thailand. The US and China and their allies, notably the Thatcher government, backed Pol Pot in exile in Thailand, providing the Khmers with intelligence, food, weapons and military training. The Khmer Rouge continued to fight the Vietnamese and the new People's Republic of Kampuchea government during the Cambodian–Vietnamese War which ended in 1989.

The organisation was largely dissolved by the mid-1990s and finally surrendered completely in 1999. In 2014, two Khmer Rouge leaders, Nuon Chea and Khieu Samphan, were jailed for life by a United Nations-backed court, which found them guilty of crimes against humanity for their roles in the Khmer Rouge's genocidal campaign.

All content from Kiddle encyclopedia articles (including the article images and facts) can be freely used under Attribution-ShareAlike license, unless stated otherwise. Cite this article:
Khmer Rouge Facts for Kids. Kiddle Encyclopedia.