In this Japanese name, the family name is Toyotomi. 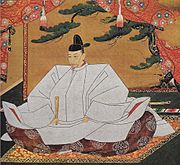 Portrait of Toyotomi Hideyoshi drawn in 1601.

Toyotomi Hideyoshi (豊臣 秀吉code: ja is deprecated ) (February 2, 1536 or March 26, 1537–September 18, 1598) was a military leader of Japan. He was born in Owari (which is now called Nagoya city, Aichi prefecture). He grew up to become a daimyo. Hideyoshi came to power after his master, Oda Nobunaga, died. He built the Osaka Castle in Osaka. Then, Hideyoshi unified Japan. He became a regent for the Emperor. The time of Hideyoshi's rule is usually called the Momoyama period.

Toyotomi Hideyoshi made many changes in laws and culture. For example, he made a law that only the samurai could carry weapons.

All content from Kiddle encyclopedia articles (including the article images and facts) can be freely used under Attribution-ShareAlike license, unless stated otherwise. Cite this article:
Toyotomi Hideyoshi Facts for Kids. Kiddle Encyclopedia.